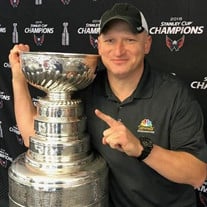 Michael A. DiVenere, affectionately known in the professional sports world as MikeyD and career videographer for NBCSW, died suddenly of natural causes on Monday, June 25, 2018. MikeyD was on assignment in Dallas, Texas for the NHL Draft. He spent over 20 years covering Washington Sports, including 8 years on the Washington Redskins Beat. Born April 9, 1969, MikeyD grew up with a love of Heavy Metal, Adult League Hockey, the Washington Redskins and the Washington Capitals. He was rough and tumble hockey to the core. This years “CAPS” run for the Stanley Cup was the pinnacle of his career. During Game 5 as Lars Eller scored the Cup clinching goal, MikeyD began to realize his dream of a Stanley Cup Championship was about to become hockey history. As the buzzer sounded, tears of joy flooded down his face. He loved this team as much as life itself. He knew first- hand the feelings of being a national champion when the DC Rattlers (a team he played on) won several Hockey North America Championships, many held in Las Vegas. Michael is survived by the love of his life, Shannan Van Kirk, his parents, Pete and Marsha DiVenere, his brother Chris and his wife Krista, and their three children, Alexis “Queen Boo,” Brenden and Camdyn. Michael was preceded in death by his maternal grandparents, Earl and Emma Smith and his cousin Jeff Smith. Visitation will be from 10 am-12 pm on Monday, July 2, 2018, at Ox Hill Baptist Church, 4101 Elmwood Street, Chantilly, Virginia, with the Celebration of Life Service beginning at 12 noon. Family and friends will be received at 42473 Mandolin Street, South Riding, VA 20152 immediately following the service. Please share online condolences with the family at www.loudounfuneralchapel.com

Michael A. DiVenere, affectionately known in the professional sports world as MikeyD and career videographer for NBCSW, died suddenly of natural causes on Monday, June 25, 2018. MikeyD was on assignment in Dallas, Texas for the NHL Draft. He... View Obituary & Service Information

The family of Michael Anthony DiVenere created this Life Tributes page to make it easy to share your memories.

Michael A. DiVenere, affectionately known in the professional...

Send flowers to the DiVenere family.