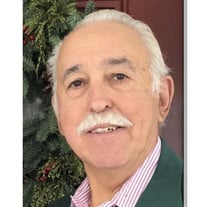 Michael J. Sierra passed away peacefully in his sleep on March 27th, 2021 at his home in Round Hill, Virginia surrounded by family and friends. Mike Sierra was born in San Antonio, Texas in the summer of 1941. The eldest son of a family of six children, he grew up in central Texas and joined the Texas National Guard. Following graduation from Brackenridge High School, he enlisted in the United States Army in 1959. Following service overseas as a Non-Commissioned Officer he was selected for the Infantry Officer’s Candidate School program at Fort Benning, Georgia. Upon graduation he was assigned to the 101st Airborne Division at Fort Campbell, Kentucky where he met and later married, Carol Kaye Riggins of Clarkesville, Tennessee. In 1965 he deployed with the 101st Airborne to the Republic of Vietnam as an Platoon Leader with the 2nd Battalion of the 327th Infantry Regiment. He returned to Vietnam with the 1st Cavalry Division as a Company Commander with the 2nd Battalion of the 8th Cavalry Regiment in 1967. He earned a Bachelor’s and Master’s Degree from the University of Arizona. While stationed at Schoffield Barracks, Hawaii he commanded the 35th Infantry Battalion, and 3rd Infantry Brigade of the 25th Infantry Division. He was the final Commandant of the US Army School of the Americas and led its movement from Colon, Panama to Fort Benning Georgia in 1984. His final assignment was as the Director of Strategy, Planning and Operations as the US Army War College. He served the Nation in war and peace until his retirement as a Colonel in 1989, having earned the Silver Star, the Bronze Star with V device and two oak leaf clusters, the Defense Superior Service medal, the Legion of Merit, the Good Conduct Medal, the Parachutist Badge, Air Assault Badge, and the Combat Infantryman’s Badge. Following his retirement, after a brief stint in industry he founded the Ventura Group in 1995. Ventura is a Service Disabled Veteran Owned Small Business (SDVOSB) that has been providing management and subject matter expertise to the US Federal Government for over a quarter of a century. It employs over a hundred people and is based in Ashburn, Virginia. Mike was active in his community and contributed to multiple causes. In 2014 he was diagnosed with Stage III lung cancer related to his service in Vietnam. Following aggressive treatment at the MD Anderson Cancer Center in Houston, Texas he enjoyed seven years of remission. The cancer reoccurred this January and was beyond treatment. He was loved by all who knew him and will be sorely missed. He is survived by Carol Kaye, his wife of 56 years, his two children (Michael Joseph and Deanna Lynn), four grandchildren (Jonathan David, Gabrielle Olivia, Isabella Rose and Michael Giacomo), a Son-in-Law (Gary Robert), a Daughter-in-Law (Carol Michele), and an extended family across the US. He leaves behind comrades, colleagues, partners, neighbors, team-mates and friends. It was his wish to be interred at Arlington National Ceremony and the family anticipates a military funeral in early autumn. Arrangements are being handled by Loudoun Funeral Chapel of Leesburg, Virginia. The family asks that In lieu of flowers please consider a contribution to the Blue Ridge Hospice (https://brhospice.org/) in Winchester, Virginia.

Michael J. Sierra passed away peacefully in his sleep on March 27th, 2021 at his home in Round Hill, Virginia surrounded by family and friends. Mike Sierra was born in San Antonio, Texas in the summer of 1941. The eldest son of a family of six... View Obituary & Service Information

The family of Michael J. Sierra created this Life Tributes page to make it easy to share your memories.

Michael J. Sierra passed away peacefully in his sleep on March...

Send flowers to the Sierra family.