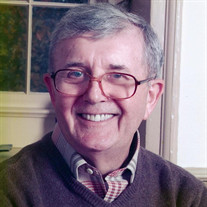 Michael Terpak 80, passed away on Saturday, July 4, 2020 at Heritage Hall in Leesburg, Virginia. Born in Carbondale Pennsylvania on May 21, 1940, he was the son of the late Michael S. Terpak and the late Stasia (Lisowski) Terpak. Mike graduated from Fell Township High School in 1957 and received a Bachelor of Science Degree from Rensselaer Polytechnic Institute in 1961. He was awarded a Masters Degree with honors in Economics from Pennsylvania State University and a Masters Degree in Business Administration from George Mason University. Mike retired from the District of Columbia government in December 1997 after nearly 32 years as a Budget Analyst, and held analyst positions in the public and private sectors before and after his service with the DC government. Mike married Mary Louise Burke on December 30, 1965 in Quincy, Massachusetts. Mary and Mike lived on Capitol Hill in the District before moving to their small farm near Lovettsville, VA. From the late 1960’s until two years before his passing Mike spent much of his time restoring the farm and late 18th century farmhouse and tending to their dogs, cats and horses. He enjoyed fishing, bird watching, gardening, history and mystery novels. He was thoughtful and funny and got along with everyone. Mike is survived by his wife Mary, sisters Louise Sterner of Vienna, VA and Frances Terpak of Sherman Oaks, CA, son Stephen M. Terpak of Springfield, VA, daughter Ellen M. Dague of Alexandria, VA, and two grandchildren, Sofia Terpak and Max Dague. He is also survived by two nieces and a nephew, a grandniece and grandnephew, and several cousins. A private graveside service will be held at Hillsboro Cemetery. Memorial contributions to the Michael J. Fox Foundation for Parkinson’s Research, P.O. Box 5014, Hagerstown, MD 21741 would be greatly appreciated. Condolences may be sent to P.O. Box 198, Lovettsville, VA 20180.

Michael Terpak 80, passed away on Saturday, July 4, 2020 at Heritage Hall in Leesburg, Virginia. Born in Carbondale Pennsylvania on May 21, 1940, he was the son of the late Michael S. Terpak and the late Stasia (Lisowski) Terpak. Mike graduated... View Obituary & Service Information

The family of Michael Terpak created this Life Tributes page to make it easy to share your memories.

Send flowers to the Terpak family.