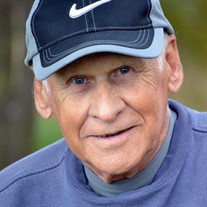 Mickey Lee Hile, age 80, of Frederick, MD, passed away on Sunday, October 21, 2018, at Tribute One Loudoun in Ashburn, VA. Born Wednesday, October 19, 1938 in Ravenna, Nebraska, he was the son of the late Martin and Irene (Warrick) Hile. Mickey worked for our federal government in charge of computer systems in the U.S Army hospitals and clinics worldwide. His first love was his family and friends. His hobbies were upland game hunting in Nebraska, The Civil War, Nationals Baseball, Washington Redskins, and his beloved Nebraska Cornhuskers. He published a book on the Hile genealogy which his extended family gratefully received. Mickey was raised in Benedict, Nebraska and St. Paul, Nebraska and graduated from St. Paul High School. He attended and received a Bachelor’s degree in Mathematics from Hastings College and a Master’s degree in Computer Science from The Johns Hopkins University. He is survived by his wife Julie Petersen Hile, daughter Keri Beth Hile Youngner, son Martin Thomas Hile, daughter in law Becki Thomas Hile, six grandchildren: Seth (wife Cierra (Custer) Youngner and Tessa Youngner, Calli, Clark and Christian Hile, and two great grandchildren: Nolan and Noelle Youngner, and many friends and loving family members. Mick was in love with his home state of Nebraska and all the people who reside there. As they say “There is no place like Nebraska.” He was greeted in Heaven by his family, and labs Gus and Gunnar, whom he loved dearly. His ashes will be interred in Fort McPherson National Cemetery in Maxwell, NE. Memorial Donations may be made to Civil War Trust 1156 15thSt NW Suite 900 Washington D.C., 20005 or to Greater MD Alzheimer’s Chapter 108 Byle Drive Suite 103 Frederick, MD 21702. Online condolences may be made to the family at www.loudounfuneralchapel.com

Mickey Lee Hile, age 80, of Frederick, MD, passed away on Sunday, October 21, 2018, at Tribute One Loudoun in Ashburn, VA. Born Wednesday, October 19, 1938 in Ravenna, Nebraska, he was the son of the late Martin and Irene (Warrick) Hile. Mickey... View Obituary & Service Information

The family of Mickey Lee Hile created this Life Tributes page to make it easy to share your memories.

Send flowers to the Hile family.