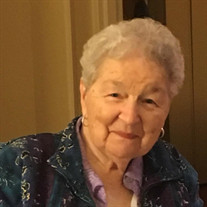 Mildred (Bea) Rutledge, 93, of Leesburg VA passed away peacefully on Thursday, March 31, 2022 at her home. Mrs. Rutledge was born June 1, 1928 in Cycle, NC to the late Robert Glenn and Cooper Lee Segraves. Bea graduated from Ronda High School class of 1945. She was a member of Faith United Methodist Church prior to her move to VA in 2015 and was active in multiple churches throughout her life. She was employed at Western Electric before becoming a wife, mother and homemaker. In addition to her parents, she is preceded in death by the love of her life Harry Lee Rutledge and her brothers Bob and Leo Segraves. Surviving are her daughter Debby Rutledge Scozzie and husband Skip Scozzie of Ashburn, Va.; son Keith Rutledge of Canton, Ga.; granddaughter Maddy Scozzie of Herndon, Va.; Her brothers, Ronnie Segraves of Mauldin, SC; Lester Segraves of Selinsgrove, Pa.; and various nieces and nephews who treasure their Aunt Bea. Bea grew up in North Carolina and Pennsylvania. She married Harry Rutledge on May 1, 1948 at the Southside Baptist Church in Winston Salem. The couple initially lived in Rural Hall before moving to Winston Salem where they built their first home. Mr. and Mrs. Rutledge were founding members of Bethania Baptist Church. She was active in Sunday School, Vacation Bible School and sang in the choir. Bea’s passions were first and foremost her family. She was never happier than when she was surrounded by family for holidays or anytime they came together. She loved multiple pets over the years but none was more beloved than her dear Papillon “Turby”. Bea was a very creative person and loved doing ceramics with her best friend and sister in law Joy Segraves. She also enjoyed decoupage, knitting and crocheting. She was an amazing homemaker, loved cooking and her famous sweet potato casserole recipe has been shared and enjoyed across several states. Bea was an avid gardener and could often be found tending to her flowers out in the yard even on the hottest southern days. She also loved house plants especially Orchids, and somehow kept that finicky plant looking its best. Harry and Bea were in various bowling leagues over the years where they won multiple competitions. She could frequently be found watching sports with Harry as they were big Wake Forest fans and loved watching college basketball, especially the ACC Tournament. She also had some pretty special matchmaking skills as she set up both of her brothers with their future wives. Bea’s kindness, thoughtfulness and generosity were felt by everyone she came in contact with and are the heart of her amazing legacy. A graveside service will be held at 11 AM on April 30, 2022 at Rural Hall Memorial Park. Drew Southern will officiate. In lieu of flowers, the family requests that memorials be made to Blue Ridge Family Hospice of 333 West Cork Street, #405, Winchester, VA 22061 (brhospice.org).

The family of Mildred Beatrice Rutledge created this Life Tributes page to make it easy to share your memories.

Send flowers to the Rutledge family.