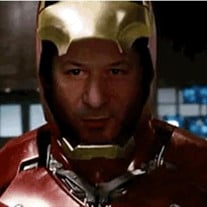 After Complications with a mini arc reactor, Iron Man, Mitchell Yale Davis, 58, died unexpectedly at his home on 12/22/2020, He was born in Washington DC on 12/1/1962 (actually it was on 12/3/1962 but the DC Government screwed up his birth certificate, first case of the inadequacies of government he would know). He is preceded in death by his father Norman Davis and Mother Jody Davis. He graduated from Wakefield High School Class of 1980, Go Warriors!! He then went on to graduate from UMDC with a BS in Chemistry. He then went on to start a successful company and spent over 30 years consulting to large private and government entities. He is survived by his daughters Allura Davis, 14, Sloan Davis 11, the mother of his Children Tina Davis and his Sister Debbie Davis. One of Mitch’s greatest treasures were those he called friend. A Quote from Mitch’s Journal to be shared with all: “If I am lucky enough to have my remains returned the earth by the hands of my friends, then I am honored among men and blessed by the gods. For in all my travels, in all my thoughts, in all that I am, their friendship was the greatest thing in this earth to me. I felt extreme pride in calling them my friends and humbled by their wish to have me as their friend. For in all the world that I have been these people I call friends are some of the greatest people on earth and my love for them shall remain alive forever.” Although he threw some of the most memorable parties over the past 3 decades, he would trade it all for a night at Echostage with a Vodka Cranberry in hand and Marcus Schultz on stage (they did not do bottle service of Nuts & Berries at the clubs sadly). Titos Vodka and Kettle One are devastated by the loss of this great man. He was a mentor, friend, teacher, and consummate student of life. Oh, and let us not forget he was also a gentlemen farmer, body builder, Black Belt in Shidōkan Karate, State Champion Traditional Archer, avid prepper, notorious for his disdain for government, hated the IRS and the Police. Some things we cannot discuss as they may be watching… but those who know, know! A Celebration of Life will be announced later in the year as Mitch had to go out during a Pandemic and we cannot give him a proper send off. He also would not want us being caught in a large gathering by a nasty neighbor calling the police to rat us out. Last thing he would want is the government involved in his return to the earth. Finally, the family asks that in honor of Mitch that you write your Congressman and ask for the repeal of Income Tax & Day Light Saving Time. Please share online condolences with the family at www.loudounfuneralchapel.com

The family of Mitchell Yale Davis created this Life Tributes page to make it easy to share your memories.

After Complications with a mini arc reactor, Iron Man, Mitchell...

Send flowers to the Davis family.