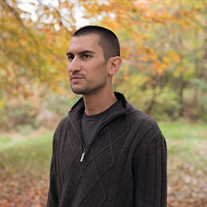 Nicholas Andrew Butler, 33, of Ashburn, VA, passed on Friday, March 8th, 2019 after a long and courageous battle with cancer. Nick was born on October 4, 1985 in Bedford, VA. He grew up in Bedford and distinguished himself as a scholar and athlete, with a special fondness for soccer and wrestling. After graduating from high school, Nick attended the University of Virginia. Nick majored in computer science and graduated with his bachelor's degree in 2008. Nick went on to work as an IT consultant supporting many critical federal customers. Most recently, Nick was employed by CACI and proudly supported the US Department of Homeland Security, helping implement mission critical IT systems to defend the nation. In 2013, Nick met the love of his life, Virginia "Nina" Mihelcic. Nick soon fell in love with Nina's young daughter, Ella, as well. At the same time, Nina's parents, brothers, sister, and extended family all fell in love with Nick. Nick married Nina and Ella on a beach in Ocean City, Maryland on June 19, 2015. The beach would become their family's special place and they vacationed there every summer. Nick and Nina went on to have another daughter, Vera Darlene, in July of 2017. The birth of his daughter was the proudest moment of Nick's life and together with Nina he raised both of his daughters with love and patience. Nick cared for, played with, and read to his daughters constantly. Nick coached Ella's soccer team in the fall of 2018. Nick loved to play and coach soccer, rock climb, shoot, and be in the outdoors. Most of all, Nick loved making his wife and daughters happy. Every weekend brought new adventures to parks, zoos, museums, wineries, and breweries. Nick was a kind and gentle man who seldom raised his voice or lost his patience and never yelled. He treated everyone with dignity and respect and was happiest when all around were happy. Nick passed peacefully in his sleep with his beloved wife Nina at his side until the end. He leaves his family to cherish his memory including his wife Virginia “Nina” Butler, daughters, Ella Virginia and Vera Darlene, mother and father, Stan and Lisa Butler, sisters Kathy Rogers, Elizabeth Butler, and Susan Butler, mother Linda Schlekau, and stepfather Lou Schlekau. The world is a better place because of Nick Butler and his family and friends are all richer for the time they spent with Nick. A memorial service to celebration Nick’s life will be held on Saturday, March 16th, 2019 - 01:00 PM to 02:00 PM Loudoun Funeral Chapel located at 158 Catoctin Circle, S.E., Leesburg, VA 20175. In lieu of flowers, donations may be made to the Nicholas A Butler Memorial Fund to be used for the care and education of his daughters Ella and Vera. Please visit https://www.gofundme.com/the-nicholas-a-butler-memorial-fund to contribute. Please share condolences with the family www.LoudounFuneralChapel.com

Nicholas Andrew Butler, 33, of Ashburn, VA, passed on Friday, March 8th, 2019 after a long and courageous battle with cancer. Nick was born on October 4, 1985 in Bedford, VA. He grew up in Bedford and distinguished himself as a scholar and... View Obituary & Service Information

The family of Nicholas Andrew Butler created this Life Tributes page to make it easy to share your memories.