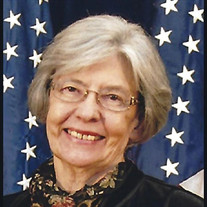 Ona Jean Armentrout Obituary Ona “Jean” Armentrout of Leesburg, Virginia passed away peacefully at home on October 10, 2021. She was born on February 22, 1935 in Cherry Grove, West Virginia to the late Vivian Richard Waybright,Sr. and Erma Lambert. Jean is survived by her daughter, Pamela Armentrout and her son, Douglas Armentrout; three grandchildren, Amy (Troy), Christopher and Jennifer; stepsiblings Brenda Durham and Howard Nuckols, a large extended family and a wonderful collection of dear friends. She will be greatly missed and was much loved by all of them. She was preceded in death by stepsisters, Carolyn Taylor and Mary Melfi. With her love of traveling, to include two tours to France and to Germany as a military wife, Jean later spent three years in Taiwan in her service with the U.S. State Department. After earning her AA degree, she accepted positions in the Department of Education and the State Department, retiring in 2013. Jean was a faithful and devoted Christian, serving as a Sunday school teacher for many years, with a fervent desire to serve her Lord fully and faithfully. Her pleasures included a love of music, reading, and the visual and performing arts, the love of which she introduced to her children and grandchildren at an early age. Jean also enjoyed baking, hosting dinners, planning local excursions, and enjoying time with her family and a circle of many close friends. Visitation will be held from 1-2 pm, with a Celebration of Life Service following at 2:00 pm, Friday, October 29, 2021 at Loudoun Funeral Chapel, 158 Catoctin Circle S.E., Leesburg, VA 20175. In lieu of flowers, memorial contributions may be made to Hospice of Northern Virginia, or to a charity of your choice.

The family of Ona Jean Armentrout created this Life Tributes page to make it easy to share your memories.

Send flowers to the Armentrout family.