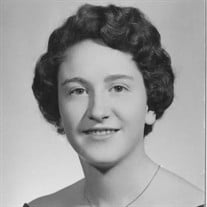 Patricia Lourdes (Cross) Davies, 74, of Ashburn, VA, formerly of New Hartford, NY, passed away February 22, 2022, with family by her side. She was born November 23, 1947 to the late Gilbert Cross and Elizabeth Cross Thall. Pat was a loving and kind woman of integrity, from her 1962 yearbook, Oneida HS …. “A blush is as quiet as she." Patricia started working in Oneida, NY for Northern Propane and later went to work for Oneida National Bank and continued in banking with other companies, specifically in Mortgage Procurement, in Utica, NY until she left the area with her husband to relocate to Williamsburg, VA, in 2001. After several years in Williamsburg, VA she and her husband John moved to Ashburn, VA to be closer to her daughter and grandchildren. She is survived by her husband John C. Davies III, and their children; Daniel, Gregory, Kathryn (Glenn) Rowan; four grandchildren, William and Dixon Davies, Alexis and Audrey Rowan; several nieces and nephews; her siblings, Steven (Mary) Cross, Robert (Melinda) Cross, Martin (Mary) Cross, and Barbara English; step sister, Kathleen (Thomas) Sheffield and Colleen Patane. She is also survived by in-laws, Rev. Julian Davies, OFM, Dorrance M. (Rosemary) Davies, Theodore R. (Rebecca) Davies, Richard J. Schiffler. In addition to her parents, she was predeceased by her sister-in-law, Deborah Ann Schiffler and her step father Howard Thall. The funeral mass for Christian Burial will take place Tuesday March 1, at 12:30pm at St. Theresa’s Catholic Church, 21370 St. Theresa Lane. Interment will be held at a later date by the family in Forest Hill Cemetery, in Utica, NY. In lieu of flowers, memorial donations may be made in Patricia’s memory (Patricia Lourdes Davies) to Alzheimer’s Disease Research, 22512 Gateway Center Drive, Clarksburg, MD 20871. Please share condolences with the family www.LoudounFuneralChapel.com

Patricia Lourdes (Cross) Davies, 74, of Ashburn, VA, formerly of New Hartford, NY, passed away February 22, 2022, with family by her side. She was born November 23, 1947 to the late Gilbert Cross and Elizabeth Cross Thall. Pat was a loving and... View Obituary & Service Information

The family of Patricia Lourdes Davies created this Life Tributes page to make it easy to share your memories.

Send flowers to the Davies family.