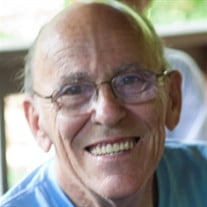 Patrick Raymond Smith, 76 of Lovettsville, Virginia passed on Monday, August 19, 2019. Born Monday, August 31, 1942 in Claytonia, Pennsylvania, a son of the late Howard L. Smith and the late Nora C. Cort. Patrick grew up in Pennsylvania and went on the serve his country in the United States Navy for 2 enlistments, from 1961 to 1968. After his career in the Navy, he went to work for CSX, formerly RF& P Railroad, as a railroad clerk. He leaves his family to cherish his memory, his four children, Connie Rae Smith of Bridgeville, DE, Brian Vincent (Melissa) Smith of Lovettsville, VA, Jeff Ryan ( Mariela) Smith of Martinsburg, VA, Amanda Marie (Sean) Engles of Haymarket, VA; his brother, Roy Smith of PA, sister, Nancy Marr of TX; also survived by 9 grandchildren, Katey, Cari, Lily, Mia, Cecilia, Kevin, Ben, Eva and Rey. A funeral service will begin at 6:30 PM on Friday at Loudoun Funeral Chapel located at 158 Catoctin Circle, SE Leesburg, Virginia 20175. In lieu of flowers, memorial donations may be made in Patrick's memory to The American Legion (legion.org) or to Alex’s Lemonade Stand Foundation (alexslemonade.org). Online condolences may be made to the family at www.loudounfuneralchapel.com

The family of Patrick Raymond Smith created this Life Tributes page to make it easy to share your memories.

Send flowers to the Smith family.