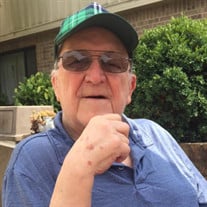 Paul Edwin Erb, 87, of Leesburg, VA, passed peacefully in his sleep on Saturday, February 5, 2022. Born March 21, 1934 in Blairs Mills, PA, he was the son of the late Arthur A. Erb and Hazel M. Goshorn Erb. Paul graduated from Orbisonia High School in Orbisonia, PA with the class of 1952. He was an avid football and baseball player for his high school teams. He was of the Seventh Day Adventist faith and attended the Chambersburg Seventh Day Adventist Church for many years. He loved the Lord and shared the gospel with everyone he knew. He was a veteran of the US Army, stationed in Fort Benning, GA, where he trained to be an Army Medic and he also played baseball for the Army team. He worked for the US Government at Letterkenny Army Depot in Chambersburg, PA for many years. He took an early retirement from Letterkenny and became an owner/operator truck driver hauling heavy equipment for Keen Transport in Carlisle, PA. He traveled all over the US, and received an award of recognition for driving over two million miles accident free. After retiring from truck driving, he worked as a Security Guard for various companies. Paul was an outdoor enthusiast that had a passion for fishing and hunting. He also enjoyed traveling and taking his family on vacations across the US and Canada. He is survived by his son Bryan Erb and wife Esther of Carlisle, PA, and his daughter Valerie Erb Oden and husband Samuel of Kearneysville, WV. Three grandsons, Jeffery, Tommy, and Bradley Erb, two granddaughters, Jessica and Ashley Hinton, one great granddaughter, Bella Erb, a brother, Gerald “Mark” Erb, of Blairs Mills, PA, and several nieces and nephews. In addition to his parents, he was preceded in death by his first wife, Betty Briggs, and a brother, Calvin Erb. Services will be private with interment at Parklawns Memorial Gardens and Mausoleum in Chambersburg, PA. In lieu of flowers, memorial donations can be made to the Chambersburg Seventh Day Adventist Church, 160 East Liberty Street, Chambersburg, PA 17201. Please share condolences and memories with the family www.LoudounFuneralChapel.com>

The family of Paul Edwin Erb created this Life Tributes page to make it easy to share your memories.

Paul Edwin Erb, 87, of Leesburg, VA, passed peacefully in his...

Send flowers to the Erb family.