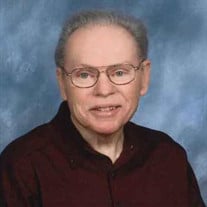 Paul T Henderson, 85, of New Hartford, NY passed away peacefully on May 15, 2019 at St. Elizabeth’s Hospital with his loving family by his side. Paul was born January 15, 1934 in Boston, MA, the son of the late Carl T and Dorothy (Callahan) Henderson. He attended primary school in Boston, earned a full scholarship to attend Boston College, and then graduated from there in 1955. He then served four years as an active duty officer in the United States Navy, followed by several years in the US Naval Reserve. On February 11, 1961 Paul married the love of his life, Janet J Loy, in Washington D.C., and they lived in Camp Springs, MD until transferring to New Hartford in 1973. Paul worked for the U.S. Department of Agriculture for 39 years before retiring in 1997. He was an active member of St. John the Evangelist Church in New Hartford. Paul most enjoyed spending time with family; gardening; reading; movies; and trips to the seashore. He is survived by his wife Janet; children Paul T Henderson Jr (Holly) of Saratoga Springs, NY, and Jennifer M Fiore (Tony) of Spotsylvania, VA; grandchildren Cassidy, Alexander, Lucas, Addison, Jacob and Sophia; and several nieces and nephews. Paul is predeceased by his sisters Doris L Harrington and Edith M Jordan. A Mass of Christian Burial was celebrated on Wednesday, May 22, 2019 at 11:00 at St John the Evangelist Church, New Hartford. Graveside services and interment with military honors will be held on Tuesday, June 4, 2019 at 1pm at Lovettsville Union Cemetery, Lovettsville, VA. Flowers are welcomed by the family, or you may consider a donation to a charity of choice in the name of Paul T Henderson. Local arrangements by Loudoun Funeral Chapel, Leesburg, VA.

Paul T Henderson, 85, of New Hartford, NY passed away peacefully on May 15, 2019 at St. Elizabeth&#8217;s Hospital with his loving family by his side. Paul was born January 15, 1934 in Boston, MA, the son of the late Carl T and Dorothy (Callahan)... View Obituary & Service Information

The family of Paul T. Henderson created this Life Tributes page to make it easy to share your memories.

Send flowers to the Henderson family.