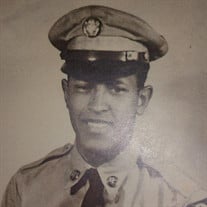 Paul Heywood Johnson left the troubles of the world behind and entered into eternal rest on Saturday, June 27, 2020 at the age of 87. Heywood, as he was affectionately known by many, was born on July 29, 1932 to the late Paul Franklin Johnson and Anna Isabel Carpenter Johnson in Loudoun County Virginia. He spent most of his life on Sycolin Road before moving into the town of Leesburg. Heywood was united in marriage on January 29, 1958 to the late Gladys Barbara Young Johnson. Heywood and Gladys celebrated 57 years together. He proudly served his country in the United States Army from March 2nd 1953 until March 2nd 1955 and received an Honorable Discharge. He was stationed at the 36th St. Louis RPC in St. Louis, MO, a proud Veteran of the United States Military whose rank was Private First Class and also served during the Korean War. He worked tirelessly for over 20 years at the Xerox Training Center for Aramark until his retirement. He was a dedicated and devoted servant at First Baptist Church Sycoline, serving as Chairman of the Deacon Board until the decline of his health. He was instrumental in adding the dining hall, concrete sidewalk and front steps to his beloved church. His favorite hymn to sing was “Stay On The Rock”. He was preceded in death by his parents Paul & Anna Johnson, loving wife Gladys Johnson, sister Laura Powell, uncle George Carpenter, cousins George & James Johnson, son-in-law Phillip Archer, Sr. and great nephew Miguel Powell. Paul leaves behind to cherish his memory three children, Paula Darwin Smith (Wade, Sr.) Middleburg, VA; Lolitta Denise Polk (Angelo, Sr.) Leesburg, VA and Stacey Elaine Archer, West Virginia; ten grandchildren Paulette Anderson (Christopher, Sr.); Wade Smith Jr. (Tara), Derek Smith, Dwayne Smith; Lorraynna Polk, Angelo Polk, Jr., Erica Polk; Phillip Archer, Jr. (Samantha), Alan Archer (Ann), Devin Archer; fourteen great grandchildren; one great great grandchild; one brother-in-law; three sister-in-laws; one godson; nieces, nephews, cousins and a host of many friends. A viewing will be held on Saturday, July 11, 2020 from 10am to 12noon at First Baptist Church Sycoline 19976 Sycolin Road, Leesburg, VA 20175 and a service will follow at 12noon with interment to follow at Gleedsville Cemetery with military honors. Please share online condolences with the family at www.loudounfuneralchapel.com

Paul Heywood Johnson left the troubles of the world behind and entered into eternal rest on Saturday, June 27, 2020 at the age of 87. Heywood, as he was affectionately known by many, was born on July 29, 1932 to the late Paul Franklin Johnson... View Obituary & Service Information

The family of Paul Heywood Johnson created this Life Tributes page to make it easy to share your memories.

Paul Heywood Johnson left the troubles of the world behind and...

Send flowers to the Johnson family.