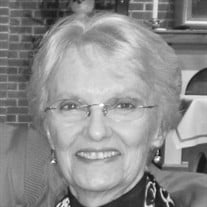 Phylis Frances (Jones) Heller was born October 10, 1936 and died peacefully at home with her four faithful daughters and long-time family friend and Spiritual Advisor, Father Tuck Grinnell, at her bedside. Phylis was the second of five children of Rose (McNelis) Jones and Phil Jones. The family resided in Tamaqua, PA, where Phylis was educated for 12 years at St. Jerome parish school. She was an outstanding student, being the Valedictorian of her class when she graduated in 1954 with a four-year scholarship to Misericordia College. Phylis was also a cheerleader, played basketball, and a member of the glee club where she often accompanied them on the piano. Phylis was offered a position at Nesbitt Memorial Hospital in Kingston, PA as a medical stenographer/secretary, and completed a business course at Wyoming Seminary School of Business. On a blind date in October 1957, Phylis met her future husband, John (Jack) Heller, and they married the next year in September 1958. In 1959, after graduating from college, Jack accepted a position with the U.S. General Accounting Office (GAO), Washington, D.C., where he eventually became the Assistant Comptroller General of the United States. They had four daughters and during their formative years, Phylis was a “stay-at-home mom”. Later, she took a part-time job with a consulting firm and then with a law firm. However, Phylis’s heart was in ministry, serving through her parish church, school and community. She completed a two-year program called Education for Parish Service at Trinity College in Washington, DC. Phylis did a lot of work in all of these areas for years, including being the first Director of RCIA (Rite of Christian Initiation of Adults). Phylis was a member of the Board of Directors of United Community Ministries and volunteered for years at its Thrift Shop, eventually being honored as “Volunteer of the Year” on two different occasions. When Jack and Phylis moved to Leisure World of VA (now Lansdowne Woods) in 1998, she taught English to the Spanish-speaking cleaning staff and recruited and trained other tutors for this purpose. She started a Genealogy Club, led Tai Chi classes weekly, became a lector and lay minister of Communion at St. Francis de Sales Catholic Church in Purcellville, VA. To quote Phylis, “Being with family and friends has been very important in my life. We have spent family vacations together for years. Holidays, birthdays, and family reunions have been important times for making happy memories also. We are blessed!” Phylis was predeceased by her devoted husband, Jack Heller, whom she lovingly cared for during his ten-year battle with Parkinson disease. She is survived by her four children: Phylis Seely (Ted), Ann Hollins (Ray), Gretchen Thomas (Chris), and Alyson Rosso (Mario), 12 grandchildren and 6 great grandchildren. In lieu of flowers, donations can be made to United Community (formerly UCM), a cause that Phylis supported for at least 40 years. Donations can be mailed to 7511 Fordson Road, Alexandria, VA 22306 or processed online by going to unitedcommunity.org. Please share online condolences with the family at www.loudounfuneralchapel.com

The family of Phylis Frances Heller created this Life Tributes page to make it easy to share your memories.

Send flowers to the Heller family.