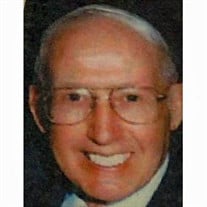 Ralph Nesbit Straley, 88, of LaPlata, Maryland passed away peacefully on February 27th, 2022, after a brief illness. Ralph was born in New Cumberland, Pennsylvania on September 7, 1933, the son of Ralph Nesbit and Helen Marie (Sutton) Straley. He earned his B.S. in Aerospace Engineering from Penn State University while attending Reserve Officers' Training Corps (ROTC) for training commissioned officers for the United States Navy. After graduation, he served in the Navy from 1955 to 1964 on the USS Savage, USS Ramsden, USS Saratoga, and USS Wilkinson. While stationed on the USS Saratoga, Ralph met and married his lovely wife, Gisele in France. After his last military tour in the Navy, he joined the Federal Aviation Administration (FAA) and advanced to the level of Branch Chief. He retired to enjoy some leisure time traveling with his wife, Gisele. Ralph enjoyed woodworking, reading the paper, watching old movies, and cultivating his beautiful gardens, which were full of flowers and attracted numerous butterflies, birds, and other animals to the yard. He is survived by his wife of 61 years, Gisele; daughter, Martine (Chip Gobs), of Ashburn, VA; son, Thierry Straley of LaPlata, Maryland; and three grandchildren, Alex Gobs, Nicholas Gobs, and Sylvie Gobs. A memorial service is planned at Arlington National Cemetery. Those who wish to remember Ralph in a special way may make gifts in his memory to: American Heart Association - http://www.heart.org/ Online condolences may be made to the family at www.loudounfuneralchapel.com

The family of Ralph Nesbit Straley created this Life Tributes page to make it easy to share your memories.

Send flowers to the Straley family.