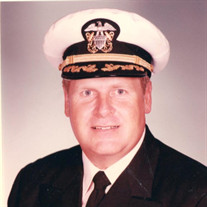 Richard Edward Daubenspeck, of Ashburn, Virginia passed away on Saturday, April 17, 2021 at Loudoun Hospital. He was born on November 25, 1932 in Scottsbluff, NE to the late Col. Wayne Martel Daubenspeck, Chaplain, US Army (ret) and Ethel Mason Daubenspeck. In addition to his parents he was preceded in death by his grandson, Jacob Taylor Daubenspeck, and by his brother Henry Mason Daubenspeck. Richard enlisted in the Naval Reserve on his 18th birthday in 1950 and graduated from Midland Lutheran College, Fremont, NE in 1954. During his 28 years of Naval service he was in the Naval Reserve Electronics Unit at Midland College and while on active duty served on the following ships: USS Union, USS Agerholm, USS Guadalupe, USS Neosho and USS Seattle. He also served a tour of duty in Subic Bay, Philippine Islands, and other shore assignments including the U.S Naval Postgraduate School, Chief of Naval Operations, and the Joint Chiefs of Staff in Washington, DC. He and his family resided in Annandale, VA for over 40 years. Following his retirement from the Navy as a Commander in 1979, Richard worked at TECHPLAN and SAIC until 1995. He was a member of St. Stephens’ United Methodist Church in Burke, VA since 1972, and was active in his community. He enjoyed working on the Daubenspeck Family History After Richard’s second retirement, he and his wife enjoyed 15 years of traveling throughout the United States and Alaska in their motor coach. Many happy times were also spent at Skaneateles N.Y. with family and friends. He is survived by his wife of 59 years, Lois Jeanne MacCrea Daubenspeck; sons, Robert Wayne and his wife Sandra Marie of Ashburn, VA, Mark Edward and his wife Lisa Gayle, of Fort Mill, SC. He is also survived by 3 grandchildren: Lindsey Gayle of Cochabamba, Bolivia, Brian Camper of Austin, TX, Jared Luke and his wife Mallory Grey of Roanoke, VA, and his sister Ruth Kistler of Leesburg, VA; and 3 great grandchildren: Silas Kade Daubenspeck, Benjamin Juan Daubenspeck, and Samuel Mario Daubenspeck. A private memorial service will be held for the family. A graveside service with interment will be held at Arlington National Cemetery at a later date. In lieu of flowers, memorial donations may be made to Special Love Inc., (for children with cancer), 117 Youth Development Ct., Winchester, VA, 22602.

Richard Edward Daubenspeck, of Ashburn, Virginia passed away on Saturday, April 17, 2021 at Loudoun Hospital. He was born on November 25, 1932 in Scottsbluff, NE to the late Col. Wayne Martel Daubenspeck, Chaplain, US Army (ret) and Ethel Mason... View Obituary & Service Information

The family of Richard Edward Daubenspeck created this Life Tributes page to make it easy to share your memories.

Send flowers to the Daubenspeck family.