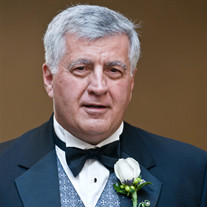 Richard “Rick” Alan Huxta, 72, loving and devoted husband to Linda (nee Doolittle) Huxta and father to daughters, Kristie Leigh and Kellye Wishard, passed away on May 31, 2020 from complications related to Parkinson’s disease. Born in Shamokin, PA and raised in Lancaster, PA, Rick graduated from Lancaster Catholic High School. He was a member of the wrestling team and played saxophone in the marching band. He also played the sax in thea local band Little Duck & the Drakes. A proud veteran of the US Navy Seabees, Rick served his country during a tour in Vietnam in 1968 and the Navy Reserves until 1972. His service and experiences as a Seabee allowed Rick to realize his dream of becoming a civil engineer. He graduated from Penn State University and later earned his Master’s degree from Shenandoah University. Rick was integral in the planning and design of numerous infrastructure projects and outdoor spaces in the MidAtlantic region. He retired from his successful career in 2016. Rick and his family relocated from Lititz, PA to Leesburg, VA in 1990. He was an active member of the Leesburg Kiwanis Club, serving in various leadership roles. He was an avid car enthusiast and could be found in local parades, revving the engine of his bright yellow Corvette. Rick also enjoyed jazz music, history, and volunteering at the Vietnam Veterans Memorial. But most of all, Rick loved his family. Nothing made him happier than family gatherings and time with the grandkids. He is survived by his wife of 50 years, his daughters and their husbands, Brandon Leigh and Jason Wishard, and five grandchildren, Hunter, Kylie, Carson, Kenley, and Julia. Rick is also survived by his admiring brothers and their wives, Joe and Patsi, Dave and Susie, and Mark and Carol Huxta, as well as his sister and her husband, Marianne and Jim Talbot. He was predeceased by his adoring parents, Joseph and Dolores Huxta. Immediate family will hold a private memorial service, with a formal military service at Quantico National Cemetery, to be held at a later date. In lieu of flowers and in gratitude for the outstanding care and compassion Rick received, the family kindly requests donations be made to the Martinsburg VA Medical Center, Hospice & Palliative Care Unit, 510 Butler Avenue, Martinsburg, WV or to his favorite charity, the Vietnam Veterans Memorial Fund.

The family of Richard Alan Huxta created this Life Tributes page to make it easy to share your memories.

Send flowers to the Huxta family.