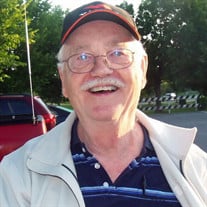 Richard W. Maylott, 83, of Leesburg Virginia passed away August 23 in his home due to heart issues. He is survived by His wife Elsie, their daughters Kathryn Maylott LaViolette (James), Margaret Maylott Mansfield (Leon) and Lisa Maylott (Peter Lawford), his sister Barbara Miller of Lovettsville, and niece Deborah Haller (Curt). He has 5 granddaughters, Emma (20), Eliza (16) Lillian (13) Pippa (6) and Fiona (1) and one grandson Gary Richard (9). Richard was born in Potsdam, New York to Marion and Carleton Maylott (the original W2YE). His younger sister Barbara was born several years later and he enjoyed having a little sister to torture! After high school he attended Union College and then University of Buffalo. He started working with the Dept of Labor upon graduating and traveled extensively doing surveys for the Bureau of Labor Statistics (BLS). In this career he would eventually become a lead supervisor and responsible for administering dozens of wage surveys for the Dept of Labor publications for fairness and equity in salary administration by job class. After a work move from New York to Washington DC he met and married Elsie Mergel, a Washington DC native in 1970. They lived in DC briefly and then moved to Sterling Virginia to raise their three girls. After retiring from a 30+ year career with the government, Richard (or Dick to many of his friends in the community) became more active in a number of local amateur radio clubs. He was a member of the Sterling Park ARC (sponsor of the QSL Bureau and Virginia QSO Party) since the mid 1980's. He was also a member of the Potomac Valley Radio Club, the Loudoun Amateur Radio Group, QCWA Chapter 91, and the National Capitol DX Association. He attended Field Day and other community events every year and enjoyed the time with his fellow HAMs. He encouraged juniors in the field to learn more about Amateur Radio and spent many hours mentoring his kids and later his grandkids in the science of radio waves, frequencies and Morse code. A Radio room at the house was always a requirement and the squelch and morse code-beeping of his activities could be heard every night after work. He supported his girls and his grandchildren with several successful science projects over the years thanks to his tutelage and knowledge. Richard was also a train collector and it was a common practice for him to pull out his Lionel 9-gauge train from his childhood and sent it up for the grandkids every Christmas. He restored and maintained his collection and enjoyed sharing it with the newest generation of Maylotts. His 6 grandchildren were big fans of the set; especially the log car and coal car. For the past several years, Elsie and Richard lived in Leesburg Virginia and enjoyed semi-retirement with their friends and family. Their door was always open for family dinners and pool time. They were blessed beyond measure to have the entire extended family in the area and spent many good years together. A celebration of life will be held at Loudoun Funeral Chapel on Friday September 11, 2020 at 5:30PM. In lieu of flowers, please consider donations to the ARRL Foundation. 225 Main Street, Newington CT 06111. http://www.arrl.org/memorial-gifts

The family of Richard W. Maylott created this Life Tributes page to make it easy to share your memories.

Send flowers to the Maylott family.