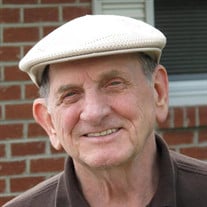 Robert B. Angst, 92, formerly of Spring Township, passed away peacefully September 14, 2021, in Ashburn, Virginia. He was the loving husband of Joan M. Angst (Kurek), who predeceased him in 2019 after 70 years of marriage. Born in Pine Grove, Pennsylvania in 1928, Bob was the son of the late Roy and Prudence (Workman) Angst. He was employed by several Reading and Pottsville area firms, eventually retiring as a plant manager from one owned by then Rockwell International. Known for his love of fishing, football, and family, Bob kept a wealth of stories from his early life and he enjoyed regaling anyone who would give him an ear. Before moving to Virginia in 2010, he was a member of Sacred Heart Roman Catholic Church, West Reading. Until the very end of his life he enjoyed watching “Jeopardy”, checking the Sports page every morning, reading his favorite books, and taking rides where he read aloud every road sign, kept time to the radio, and offered commentary on the splendors of the Virginia countryside. One of 16 children, Bob has seven surviving siblings: Mary Traub, Dorothy “Dolly” Christ, Alan Angst, Grace Fees, Beverly “Kitty” Hallick, Richard “Dick” Angst, and Bruce Angst. Many of their descendants still live in Central Pennsylvania. In addition to them he is survived by two children: Lou Ann Jones of Ashburn, VA and Daniel R. Angst of Boulder, CO. Bob was predeceased by his oldest daughter, Marybeth Beaver of Somers Point, NJ. Four grandchildren also survive him: John and David Kemp of Ashburn, VA, Hannah Angst of New York City, and Olivia Angst of Glenwood Springs, CO. A Mass of Christian Burial will be celebrated Saturday, October 30, at 10 a.m. at Gethsemane Cemetery Chapel of Resurrection with inurnment to follow. Contributions may be made to Sacred Heart Roman Catholic Church. Edward J. Kuhn Funeral Home, Inc., West Reading, is in charge of arrangements. Condolences may be expressed at www.kuhnfuneralhomes.com Local arrangements by Loudoun Funeral Chapel.

Robert B. Angst, 92, formerly of Spring Township, passed away peacefully September 14, 2021, in Ashburn, Virginia. He was the loving husband of Joan M. Angst (Kurek), who predeceased him in 2019 after 70 years of marriage. Born in Pine Grove,... View Obituary & Service Information

The family of Robert B. Angst created this Life Tributes page to make it easy to share your memories.

Robert B. Angst, 92, formerly of Spring Township, passed away...

Send flowers to the Angst family.