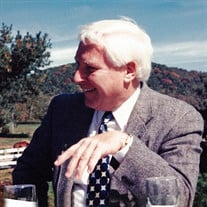 Robert James Clark, 88 of Leesburg, Virginia died Wednesday, May 5, 2021, at his home with his wife, Carol, at his side. He is survived by his daughters Mary Forbes of Westminster, MD, Barbara Heim of St. Augustine, FL, Patsy Clark of New Smyrna Beach, FL, and his son H. Ryan Clark of Brooklyn, NY, and his 10 grandchildren, and 6 great grandchildren. He was predeceased by his son Robert J. Clark of Cleveland, Ohio and his daughter Kimberly Clark of Leesburg, VA. He attended John Carroll University in Cleveland, Ohio. He started his career in the computer field with UNIVAC as a computer operator and programmer, he then went into sales with RCA, then joined Four-Phase Systems in 1972, and then began with a startup company known as GAC. He always said his passion for his work made him feel that he never really had to work. He was a master at seeing the potential in people and often promoted employees to positions that based on their experience and training may not have seemed obvious choices. Bob, as he was known by family and friends, had a wonderful sense of humor which carried him through many hard times in his life. He kept his sense of humor to the very end, which endeared him to all those caring for him in his final days. He loved his home, the planning of his yard, and the wildlife. He was dedicated to doing the crossword puzzles from the New York Times and Washington Post. He also enjoyed as a young man playing basketball and handball and in his later years golf. A private celebration of his life will be planned for his immediate family members. In lieu of flowers, please make a memorial gift to Capital Caring Health, Tunnel to Towers, or Fisher House. Please share online condolences with the family at www.loudounfuneralchapel.com

Robert James Clark, 88 of Leesburg, Virginia died Wednesday, May 5, 2021, at his home with his wife, Carol, at his side. He is survived by his daughters Mary Forbes of Westminster, MD, Barbara Heim of St. Augustine, FL, Patsy Clark of New... View Obituary & Service Information

The family of Robert James Clark created this Life Tributes page to make it easy to share your memories.

Send flowers to the Clark family.