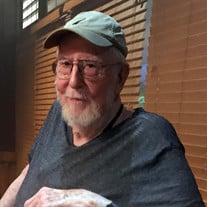 Robert E. Henabery, 93 of Sterling, Virginia passed on Wednesday, January 22, 2020, at Heritage Hall in Leesburg, Virginia. Born Sunday, September 12, 1926 in Los Angeles, California, he was the son of the late Joseph Henabery and the late Rose Lillian Nolan Henabery. Robert was preceded in death by his first and second wife, Jeanne D. Henabery, and Susan C. Henabery. He is survived by his son, Michael Cremins (Andrea), daughters, Kathryn M. Baker (Rodger) of Sterling, VA and Jennifer Markley, Grandchildren Patrick and Sarah McBride, Eileen and Brendan Cremins, Selia and Aidan Markley, and Nephew William Figueroa. Bob was a Broadcaster Extraordinaire. He graduated from Fordham University with a degree in Communication Studies and shortly afterwards landed at ABC Radio as a Director of Programming. He left the corporate world to become his own boss. He founded Bob Henabery and Associates, his radio consulting business that he had for 30 years. In 1976, Bob was asked by ABC to prepare a report for the United States Federal Communication Commission in defense of equitable distribution of radio services. The Henabery Report stated that broadcast programming, determined by competition, had produced a wide diversity in formats, necessitating a wide variety of licenses. As a result, Henabery was a force in getting the FCC to alter the manner in which radio licenses were offered to different entities. A Funeral service will be at 11:00 AM on Friday February 7, 2020 at St. John the Apostle Catholic Church located at 101 Oakcrest Manor Drive NE Leesburg, Virginia 20176. In lieu of flowers, a memorial donation can be made to the ALS Association, DC MD VA Chapter by clicking here.

Robert E. Henabery, 93 of Sterling, Virginia passed on Wednesday, January 22, 2020, at Heritage Hall in Leesburg, Virginia. Born Sunday, September 12, 1926 in Los Angeles, California, he was the son of the late Joseph Henabery and the late... View Obituary & Service Information

The family of Robert E Henabery created this Life Tributes page to make it easy to share your memories.