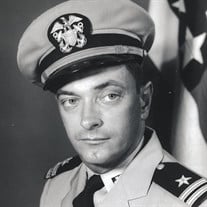 On Wednesday, September 11, 2019, Robert &#8220;Bob&#8221; Charles Heyde, loving husband and father of four children passed away at the age of 90. Robert was born in Cincinnati, Ohio on September 23, 1928 to Herman and Augusta Heyde. Robert... View Obituary & Service Information

The family of Robert Charles Heyde created this Life Tributes page to make it easy to share your memories.

Send flowers to the Heyde family.