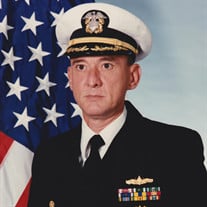 Robert Dayman Moser, 77, Captain, U.S. Navy (Retired), passed away on December 17, 2021, after a long battle with lung cancer. He lived a lifetime of loyalty and dedication to his family and his country before passing peacefully in his home in Ashburn, VA. Born in Cincinnati, Ohio to the late Robert and Eleanor Moser, Bob was a member of the Woodward High School class of 1962 and a 1966 graduate of the University of Cincinnati where he was a member of the Phi Delta Theta fraternity. Wanting to serve his country, he was commissioned as Ensign April 1967 upon completion of Officer Candidate School. He attended submarine school and was designated qualified in submarines in 1969. In 1976, he was additionally designated surface warfare qualified. He earned his master’s degree from George Washington University. Bob’s life was marked by an unwavering commitment to his country and the United States Navy. His decorated Naval career included sea duty tours on USS DARTER (SS 576), Submarine Group EIGHT, USS THOMAS C. HART (FF 1092), and Executive Officer, USS LEAHY (CG 16). CAPT Moser commanded USS BOWEN (FF 1079) from June 1985 to May 1987. Commodore Moser served as Commander, Destroyer Squadron TWENTY, deploying to DESERT SHIELD then to DESERT STORM and the Red Sea as the Maritime Interception Task Group Commander. Ashore, CAPT Moser served with distinction the U.S. SIXTH Fleet, U.S. Atlantic Fleet, Surface AAW Branch Head, Director of Naval Warfare (OP-095), ASW Training Group, Atlantic, and Deputy Director for Operations and Plans, U.S. Atlantic Fleet. Bob retired as Commanding Officer of the Fleet Training Center in Norfolk, Virginia. Bob formed strong bonds with all of his shipmates and mentored many. Upon retirement in 1997, he continued his service in the civilian sector where he worked for Alpha Solutions developing training programs for the U. S. Navy. Bob was passionate about education and equipping sailors with the tools necessary to serve their country to the best of their abilities. Bob and his wife, Lois put down roots wherever they settled, developing friendships that lasted a lifetime. In time, Virginia Beach, Virginia became “home” where they were active with Hope Lutheran Church and the Bonsai Club of Virginia Beach. They enjoyed their retirement there until health issues made it necessary for them to relocate to Ashburn, Virginia in 2018. Bob was an avid gardener and bonsai enthusiast. He loved woodworking and clocks. He had an attention for detail, could fix anything, and instilled an attitude of teamwork in his career and at home. He set an example of loyalty, faithfulness, and integrity. He was fiercely proud of his grandchildren, delighted by their achievements, and he will be missed. Bob is survived by Lois, his wife of 55 years, his children, Kelli (Dennis) Knight of Forest, Virginia and Robert (Katy) Moser, Jr. of McLean, Virginia and his four grandchildren, Madelynn Knight, Maegan Knight, Robert Moser III and Wilburn Moser. Captain Robert Dayman Moser will be interred at Arlington National Cemetery.

Robert Dayman Moser, 77, Captain, U.S. Navy (Retired), passed away on December 17, 2021, after a long battle with lung cancer. He lived a lifetime of loyalty and dedication to his family and his country before passing peacefully in his home... View Obituary & Service Information

The family of Captain Robert Dayman Moser USN(Retired) created this Life Tributes page to make it easy to share your memories.

Send flowers to the Moser family.