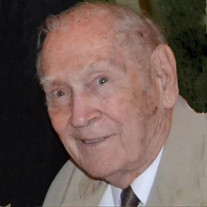 Robert (Bob) Robinson, age 94, of Ashburn Virginia passed away peacefully on the morning of November 2, 2018 Robert was born in Alexandria, Virginia on April 5, 1924. Robert married Berta Bender on October 6, 1951 and they remained married for 65 years. Robert was a devout Catholic and went into the seminary with the objective of becoming a Maryknoll Missionary. After several months of studying for the Maryknoll order Robert decided to change course and joined the US Navy as an independent duty Navy Corpsman/Medic serving his country in the Pacific theater during World War II. His World War II service included the battles for the liberation of the Philippines and the battle of Iwo Jima. After World War II Robert moved from the US Navy to the US Air Force where he served as a Sgt Major in the Medical Corp for 27 years. He met the love of his life, Berta, while stationed in Germany with the US Air Force. Robert served domestically and in Spain, France and Germany while with the US Air Force. After retiring from the military Robert was employed by the DC Hospital Council. Robert soon realized that a desk job was not what he wanted and made a complete career change. Robert went back to College and obtained a criminology degree and began his new career in 1976 as a US Capitol Police Officer. Robert worked in that capacity for 12 years. Outside of his professional life Robert was an accomplished artist who painted several beautiful oil paintings. He also loved music and gardening. He and his wife Berta were actively involved in the Woodberry Garden Club of Maryland. He loved spending his summers on the Maryland Eastern shore crabbing and fishing with his children and grandchildren. Robert also did extensive volunteer work with Hospice of Northern VA. and was an active member of the Knights of Columbus. By any measure, Robert led a truly exceptional life of service to his country, family and the Lord. Robert is survived by his children Michael Robinson (Inga), Stephen Robinson (Lisa), and Joanne Mergens (Steve) his grandchildren; Julia Holmes (John), Laura Keys (Adam), Jacqueline Robinson-Brock (Mike), Rachel Robinson, Danielle Harpine (Chris), Christina Mergens and Matthew Mergens his great grandchildren Vivian Holmes, Adam Keys, Theodore Keys, Kristopher Robinson-Brock, Paison Blake Robinson, and Skylar Harpine A visitation will be held on Saturday, November 10, 2018 from 10-11am at St. Theresa Catholic Church 21371 St. Theresa Lane, Ashburn, VA and a funeral mass will begin at 11am. Graveside services will be held at Arlington National Cemetery at a later date. In lieu of flowers memorial donations may be given to Hospice of Northern Virginia. The family of Robert Robinson wishes to thank the nurses and other caregivers who have shown their love, care, and kindness to Bob during his final days with us. Please share condolences with the family at www.loudounfuneralchapel.com

Robert (Bob) Robinson, age 94, of Ashburn Virginia passed away peacefully on the morning of November 2, 2018 Robert was born in Alexandria, Virginia on April 5, 1924. Robert married Berta Bender on October 6, 1951 and they remained married for... View Obituary & Service Information

The family of Robert Lee Robinson created this Life Tributes page to make it easy to share your memories.

Send flowers to the Robinson family.