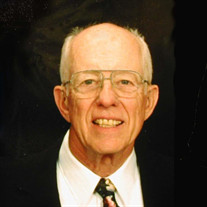 Bob Sherfy. Beloved husband, father and friend. Robert Browning Sherfy of Loudoun County Virginia peacefully departed this earth on May 31, 2020 in Leesburg, VA. Born in Washington, DC, in 1926, Robert (Bob) was the only son of the late Robert Elwood and Anna Sherfy. He was enlisted in the US Naval Reserve from 1945 - 1946, attended college on the GI Bill, and graduated from University of Maryland in 1951 with a degree in Mechanical Engineering. Bob used his engineering skills at the US Army Corp of Engineers from 1951-1961, Fort Belvoir 1961-1982 and VSE Corporation from 1982-1988. He received numerous awards for excellence in engineering throughout his career. Bob married Patricia (Pat) in 1952 in Washington DC. He designed one of the first contemporary homes in Loudoun County Virginia based on the design principles of Frank Lloyd Wright & other architects. Bob and Pat, with the occasional help of friends, built their butterfly-roof home in Broad Run Farms in Sterling where they raised 4 children. Bobwas known for his ability to fix or build anything & to solve any problem. He and Pat were the ultimate DIYers of their day and a helpful resource for friends & neighbors. Bob’s determination extended to building a small airplane and obtaining his small-craft pilot’s license. Bob was active in the Broad Run Farms community from 1955 through 1985 where he also served as a member of the Civic Association. Each summer, he acted as the Master Lighter for the Broad Run Farms July 4th fireworks. In winter, he was the guy to drill through the ice and give the all-clear for skating on the local pond. Bob’s adventurous spirit inspired a cross-country motorcycle trip in the 1940’s with his friend Bill Burke lasting several months. In the 60’s & 70’s he built lifelong summer memories on multi-week camping trips out west with the family piled into a station wagon & pulling a popup camper. In retirement, he and Pat crisscrossed the US in an RV they renovated and named “Lurch.” Later adventures took them to Europe, China, the Galapagos Islands & beyond. Closer to home, they became avid birders, traveling to identify birds and participate in hawk counts. Bob was a beautiful whistler and could also play the trumpet, trombone, guitar, and harmonica. His appreciation for music led the couple to attend folk and bluegrass festivals, and to volunteer at WolfTrap for many seasons. Bob was a friendly, curious, lifelong learner. He researched the Sherfy family lineage within the US and in Europe and helped update and maintain the genealogy of the Sherfy family. He and Pat became frequent visitors to the museums in the DC area, and they viewed local yard sales as a serious weekend sport. Bob is predeceased by his wife Pat Sherfy. He leaves to cherish his memory his son, Robert Eric and wife Denise Sherfy, with two grandchildren: Brett Sherfy and wife Michelle and great granddaughter Lydia, and Erica Frapiccini and husband Andrew, and great grandson Lucca; three daughters Kristen Decker and late husband John Decker; Jan Sherfy and husband Herb Smith; and Andrea Cybyk and husband Roman Cybyk, with two grandchildren: Alex and Larissa. Most will remember Bob for his love of family, his kindness, his willingness to help all people and his sense of humor.The family wishes to extend their gratitude to the nursing and administrative staff of Spring Arbor and Heritage Hall, both of Leesburg, VA and INOVA Loudoun Hospital for their tender and compassionate care. No services are planned at this time due to Covid-19 risks. When it is safe, a Celebration of Life gathering will be held for Bob. In lieu of flowers, please consider making a donation to The Loudoun County Senior Center at Cascades Advisory Board. https://mycascadescenter.org/support/donate/

Bob Sherfy. Beloved husband, father and friend. Robert Browning Sherfy of Loudoun County Virginia peacefully departed this earth on May 31, 2020 in Leesburg, VA. Born in Washington, DC, in 1926, Robert (Bob) was the only son of the late Robert... View Obituary & Service Information

The family of Robert B. Sherfy created this Life Tributes page to make it easy to share your memories.

Send flowers to the Sherfy family.