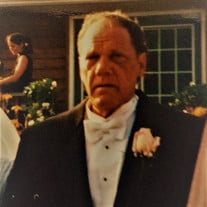 Roger Lee Lanham, age 73, passed away Friday, September 14, 2018, at INOVA Loudoun Hospital Center in Leesburg, VA. Born on June 19, 1945 in Loudoun County, he was the son of the late Charles W. and Nannie J. (Hough) Lanham. Roger loved baseball and played on numerous Little League teams throughout Loudoun County as a kid. As a teenager he played for the Raiders at Loudoun County High School. Late as an adult he played slow pitch softball on the men's league in Leesburg for the “Brandon Brewers”. He had an arm like a rocket and was pretty quick around the bases too. Once he became “too old” to play he took great pride in watching and supporting his grandson Tanner play baseball (football, basketball, track) and his granddaughter Ava play softball (cheerleading, track) in Clarke County, VA. Roger was an avid guitar player starting at age 15 and played by ear. During the late 60’s he was in a band “The Scorpions” where they were known to play on “M” Street in Washington, DC on occasion. Not long after that band disembarked Roger went on with his guitar and played in the band “Happy Medium” for a number of years. He loved every minute of it. He enjoyed watching football and baseball with his favorite teams being the Washington Redskins and Nationals. He was a member of the Blue Ridge Eagles Club of Purcellville, VA. Roger was known and loved by many for his quick wit and storytelling. He will be missed but not forgotten. Roger is survived by his daughter Kimberly Lanham-Dinkins of Winchester, VA, two grandchildren: Tanner Lee and Ava Catherine Dinkins, a brother Bill “Chuck” Lanham of St. Mary’s, GA, several nieces, nephews and extended family. In lieu of flowers you may make a donation to Children’s Hospital in Washington, DC. Funeral services will be held on Thursday September 20, 2018 at 2:00PM at Loudoun Funeral Chapel, 158 Catoctin Cr. SE, Leesburg, VA 20175. A viewing will be held on Wednesday September 19, 2018 from 6:00 to 8:00PM at the funeral chapel.

The family of Roger Lee Lanham created this Life Tributes page to make it easy to share your memories.

Send flowers to the Lanham family.