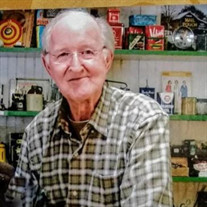 Ronald Lewis Hoover October 21, 1933 – November 10, 2020 Ronald (“Ron”) Lewis Hoover, 87, of Sterling, VA, passed away on Tuesday, November 10, 2020 at Potomac Falls Nursing and Rehabilitation Center in Sterling, VA. Ron was born on October 21, 1933 in Buckhannon, WV to the late Ronald Delos Hoover and Hilda Pauline Lewis Hoover. He is survived by his loving wife of 61 years, Dorothy (“Dot”) Pearl Fallen Hoover, his younger brother, Kenneth Patrick Hoover and sister-in-law Joyce Hollen Hoover of Buckhannon, WV, his son, Randy Craig Hoover and Ronald Michael Hoover both of Winchester, VA and his daughters; Wendy Ann Hoover of Sterling, VA and Melinda Mae Greene of Leesburg, VA. He was proceeded in death by his sister, Sally Annette Brake of Buckhannon, WV, who passed away on December 26, 2019. Ron is also survived by four grandsons; Ryan, Jeremy, Ronnie and Corey Hoover, one granddaughter; Makayla Greene and two great-grandsons Ivan Hoover and Zepp Hoover. All of Ron’s grandchildren and great-grandchildren reside in Virginia. Ron and Dot have been residents of Sterling, VA since 1972, when they relocated there from Falls Church, VA. Prior to moving to Falls Church in 1959 to start their life and family, they both lived in their childhood hometown of Buckhannon, WV where they met. Ron graduated from Buckhannon Upshur High School in 1953 and attended I year of college before joining the U.S. Air Force as a radio/electronics technician. While in the Air Force, he was stationed in Okinawa, Japan. Following his honorable discharge from service in 1958, he returned to Buckhannon and married his high school sweetheart Dorothy Fallen in April of 1959. They relocated to Falls Church, VA shortly thereafter. Ron went to work for Melpar Inc. in Falls Church using the electronics shills he learned in the service. He made a change in career paths in 1961 to pursue employment as a car salesman for the next 10 years at various Buick and Chevrolet dealerships in and around the Washington, D.C. area. At one point, Ron ventured out and opened his own used car dealership in Fairfax City, VA. Following his years in car sales, Ron changed paths again and pursued a career in the booming D.C. area home construction field. The wood working, building and carpentry skills he learned from his father years before were key to his understanding of home construction. For a few years, Ron started his own small construction & remodeling business in the Sterling area. In 1999, Ron and Dot started a completely new path in both of their lives by taking ownership of an antique shop in Lucketts, VA, just north of Leesburg. They made their livelihood for 21 years at the lovely shop called “My Wits End”. Together with their son Ronnie, they enjoyed all of the aspects of the antiques business and were able to meet many local people as well as many people from many states both north and south of Loudoun County. Mt Wits End became synonymous with Ron and Dot and was a very popular and well known place to find unique treasures. In March 2020, after 21 years in business, Ron and Dot were forced to close their beloved business due to Ron’s failing health. In addition to immediate family, Ron is survived by a large extended family including sisters and brother-in-law, cousins and many nieces and nephews located in West Virginia, Ohio, Alabama, Georgia, Tennessee, Pennsylvania. A private service for Ron’s immediate family was held on November 12 prior to his cremation at Loudoun Funeral Chapel and Crematory in Leesburg, VA. Our family is planning a life celebration in honor of our father in the spring of 2021 (exact date and location of which has yet to be determined) to allow Ron’s immediate and extended family members to share in remembering his long and prosperous life on this earth. Online condolences may be made to the family at: www.loudounfuneralchapel.com

The family of Ronald Lewis Hoover created this Life Tributes page to make it easy to share your memories.

Send flowers to the Hoover family.