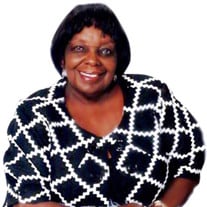 Mama Rosebella Jerono Mudavadi, 82 of Ashburn, Virginia departed this life on Wednesday, November 24, 2021, at home in Ashburn, Virginia surrounded by members of her family. She was the daughter of the late Abigail Chesang Taprongoei and the... View Obituary & Service Information

The family of Rosebella Jerono Mudavadi created this Life Tributes page to make it easy to share your memories.

Send flowers to the Mudavadi family.