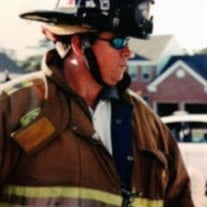 Roy Dale Ott “Rott” Roy passed on Saturday, January 23, 2021 in Berryville, VA. Beloved husband of Becky Ott. Loving father of Crystal Ott Price and Sarah Ott. Brother of Bruce Ott, Sheree Temple and Linda Lang (Brett). Loving grandfather of Christopher Roeder and also survived by his aunt Irene (Johnnie) Ballard and family, cousin of Willard and (Sue) Hazelwood, Annie Craven and Pat Solomon and family. Roy grew up in Southern Virginia happy and loved. He spent many summers at his paternal grandparents’ farm in Waverly, VA and always spoke of the special time with them. Roy’s dad was employed by Vepco (Dominion Energy) and was transferred to Leesburg. They lived in Round Hill and Roy graduated from Loudoun Valley High School in 1974. Roy married his high school sweetheart Deborah (Painter) Betson and they had a daughter Crystal in 1976. The marriage did not last but he had a continued sense of family with Debbie to ensure Crystal had both parents in her life. Family was everything to Roy. Roy and Becky met at the Leesburg Company Firehouse when she joined the fire company as a junior member in 1979. They became fast friends and then were dating. They married April 10, 1982 enjoying a happy loving life spent working, volunteering with the company, spending time whenever available with family and friends. Members of the Leesburg Volunteer Fire Company and their families became extended family. Roy was a truly dedicated volunteer in every sense of the word for many years. One of the highlights of that service was being awarded the first John Carr Volunteer of the Year Award. Roy felt that there was a need for more volunteer work that he could do. He was one of the first volunteer firefighters that earned accreditation as an EMT in order to help when he could with Loudoun Rescue Co. 13. He was very proud of that accomplishment. The chapter of Roy’s time cannot go without mention of Tom Donohoe. Tom was a member of the Loudoun Volunteer Fire Department Company; Roy was 40 years younger, but they were best of friends and Roy had a lot of love for Tom. (Fire Tom to his youngest Sarah). Mrs. Donohoe made them lunch and a birthday cake every year. Tom’s birthday was June 2 and Roy June 3. They would spend most of the day together, he loved Tom and all the wonderful memories they shared. Roy’s second daughter Sarah was born in October 1991 and that was a second wonderful blessing in his life. Roy was a devoted Dad to both girls and was always there to listen, love, and be a great Dad. He strove to be present in their everyday lives and the special times as well. Crystal and Sarah were everything to him. Everything. He enjoyed their school activities, coached Sarah for many years on her softball teams, one of the many highlights in his life. He was especially proud when Crystal joined the Loudoun County Fire and Rescue System of volunteers and became an EMT. That joy repeated when Sarah joined and became an EMT as well. In addition to all of this, Roy was employed by Vepco (Dominion Energy) following in his Dad’s footsteps since the mid 1970’s until retirement. Here again he was happy in his work that became his career with promotions up to becoming a construction supervisor. He loved the camaraderie of so many working first in the Herndon office then being able to transfer to the Leesburg office, too many to name. Lots and lots of stories shared over the years both with his work and volunteering; there was never a dull moment. Roy loved, respected and cherished his parents and spoke on the phone and visited regularly when they transitioned back to Richmond, VA, then Waverly, VA to the farm after his Dad’s retirement. Both of his parents were taken by dementia as well. Those losses broke his heart, and he committed to family even deeper. He was always trying to make things easier and better for everyone. Christopher, his grandson was another gift in his life as well, he made him a grandfather at an early age! Roy was able to get to the hospital while he was being delivered and got to meet him first after his parents, Crystal and Scott. He was walking on clouds. Roy was able to watch him grow to young adulthood, starting college and his journey. Again, he loved being a Grandpa and was proud of him. Christopher was another highlight in his life. A visitation will be held on Wednesday, January 27, 2021 from 6-8pm at Loudoun Funeral Chapel 158 Catoctin Circle, SE Leesburg, VA. Due to the current pandemic a private family service will be held on Thursday, January 28 at 3:00pm in the chapel. The service will be webcast for all to see. Please go to Roy’s obituary page to follow the link on the day of the service. Interment will be private. In lieu of flowers memorial contributions may be made to Leesburg Volunteer Fire Company or Alzheimers Association. Please share online condolences with the family at www.loudounfuneralchapel.com

The family of Roy "Rott" Dale Ott created this Life Tributes page to make it easy to share your memories.

Send flowers to the Ott family.