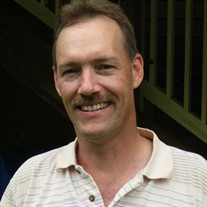 Roy Martin SeGuine, of Leesburg, VA, passed away on May 10, 2018. Roy was born on October 31, 1956 in Washington, DC to Roi and Dolores SeGuine. He grew up in Falls Church and attended Falls Church High School where he joined the band as a percussionist. He graduated with a Computer Science degree from George Mason University and took Masters classes at George Washington University. Roy worked in the IT industry for over 30 years, beginning his career at Mitre Corp., where he met lifelong friends. He was an early advocate of the internet and was proud of his meaningful work supporting Homeland Security. Roy took his hobbies seriously. He discovered drums at the age of five when his father gave him a tom-tom drum, and became an accomplished percussionist. He played drums throughout his life and continued to learn by attending drum workshops, drum circles, studying, and practicing. Roy also loved the game of table tennis when he was a younger man and even though he stopped playing many years ago, he made lifelong friends with some top-level national and international table tennis players. It was a perfect match for his lightning fast reflexes, physical stamina, and competitive nature. Roy’s other big passion was golf. He was primarily self- taught and played regularly over the last 17 years, making many good friends on the golf course. As with all his hobbies, he strove for excellence and never stopped working on his golf game. In 2017 Roy shot a career under par round of 68 at the age of 60! Roy was a deep thinker, a seeker, a warm, fun loving, kind and generous man. He had a wonderful sense of humor that grew out of his keen intelligence and unique way of looking at the world. He had a big heart to go along with his big, handsome smile. He was an honorable, affable man. Most of all, Roy was a devoted, loving husband, father, son and brother, and a genuine friend. He was loved and will be missed by all. Roy is survived by his wife, Theresa and daughter, Anna, his mother, Dolores SeGuine, his sister, Paula Young, his nieces, Fransis and Jessica Young, his great niece, Keima and great nephew, Isaac Baptiste. Roy is further survived by his in-laws: the Miller families, the McDermotts, the Moranos, the Coffmans, and the James’. The SeGuine family would like to thank everyone for the outpouring of love and support they have received. In lieu of gifts or flowers, please donate to Friends of Loudoun Mental Health in Roy SeGuine's name. Donations may be sent to: Friends of Loudoun Mental Health P.O. Box 4452 Leesburg, VA 20177

Roy Martin SeGuine, of Leesburg, VA, passed away on May 10, 2018. Roy was born on October 31, 1956 in Washington, DC to Roi and Dolores SeGuine. He grew up in Falls Church and attended Falls Church High School where he joined the band as a... View Obituary & Service Information

The family of Roy M. SeGuine created this Life Tributes page to make it easy to share your memories.