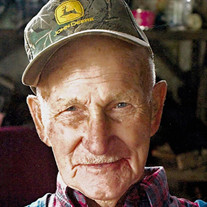 RUSSELL EUGENE BROWN, Sr., 95 of Leesburg, Virginia passed away on Monday, January 24, 2022, at the VA in Martinsburg, West Virginia.Born Friday, January 7, 1927 in Lovettsville, Va. Russell was a son of the late Thurman G. Brown and the late Dorothy Gordon Brown. Russell joined the US Army in 1946, obtained the rank of Sargeant within 2 months of enlistment. Due to hisdisplay of leadership, military courtesy, & close order drill. He was very proud of being a WW2 vet, and very proud of his service to his country. Russell was a lifelong farmer in Waterford, VA. Managing Rouge's Hollow Farm, for nearly 70 years. He worked at Loudoun Mutual for 45 years as a custodian. As well as the Waterford Foundation setting up for the Waterford Fair. You often found him working in the fields on his John Deere tractor. He was also a lifelong member of Sandy Hook United Methodist in Knoxville, Maryland. As a member of the church he had a large part in the annual apple butter making by the UM Men’s group. Russell enjoyed his family, farming, playing slots, and spending time with the “old boys” when he visited the VA, and receiving as many hugs as he could. In addition to his parents, he was predeceased by his wife Ethel Juanita Brown in 2000, daughter Victoria Butler, and sons Russell “Rusty” Brown Jr & Jeffrey “Pokey” Brown, granddaughters, Stacy Baker and Barby Ann,& three brothers, two sisters. His fur companions Roc and Spot. Surviving are son, Keith "Skeeter" Brown of Leesburg, grandson Tim Baker of Culpeper, granddaughter Jennifer Baker of Harper’s Ferry, and grandson Christopher Brown of Leesburg, & three great grandsons and one great granddaughter. One sister Evelyn Roher of Purcellville. As well as countless family members, friends, and Amos the Cat. Memorial services will be held on March 26, 2022 at 12 noon at the Sandy Hook United Methodist located at 19018 Sandy Hook Road Knoxville MD 21758. Interment will follow in Lovettsville Union Cemetery with military honors. A reception will conclude at the Old Waterford School house. In lieu of flowers, memorial donations may be made in Mr. Brown's memory to The SPCA in Leesburg. or Sandy Hook United Methodist Church. These are two things he loved, his animals, and his church. Online condolences may be made to the family at www.LoudounFuneralChapel.com

RUSSELL EUGENE BROWN, Sr., 95 of Leesburg, Virginia passed away on Monday, January 24, 2022, at the VA in Martinsburg, West Virginia.Born Friday, January 7, 1927 in Lovettsville, Va. Russell was a son of the late Thurman G. Brown and the late... View Obituary & Service Information

The family of Russell Eugene Brown Sr. created this Life Tributes page to make it easy to share your memories.