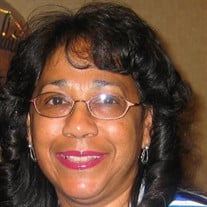 Sandra Pauline Grace April 20, 1943 – January 8, 2022 We Celebrate the life of Sandra “Sandi” Pauline Grace. She was a beautiful, loving, wife, mother, grandmother, aunt, sister, and friend. She spent her last days surrounded by loved ones, family, and friends. Sandi was called home to be with the Lord on January 8, 2022, at the age of 78 in Sterling, Virginia. She was a good and faithful servant, truly deserving of her wings. Sandi was born in Newport, Tennessee to Mary Haney and Edward Barnett Woods, Sr. on April 20, 1943. Sandi spent her early years being raised in Newport by Barnett’s mother, Sarah Woods. In her teens, she moved to Detroit, Michigan with her mother, Mary. After graduating from Central High School, in Detroit, she married her first husband, Charles Dickerson at age 20. She gained two daughters, Juanita and Deborah and the union with Charles produced two daughters: Veronica “Charlene” and Sarah “Deniene. Sandi remarried in 1974, to Harold Grace, Sr. She gained a son, Harold, Jr. The union with Harold produced one daughter, Kahlilah. Sandi rededicated her life to the Lord in 1972. From that day forward she shared her love of God with everyone she met. She was the sweetest, most kind-hearted person you would ever meet. Sandi was blessed with many talents: she could cook, bake, sew, crochet, and knit. She was the most gracious host, often hosting Sunday dinners that many church family and friends attended. While she lived a humble life working for General Motors for 32 years, she changed the lives of many; right up to the very end, witnessing for Jesus. Sandi helped many through housing families and friends, personal talks, intercessory prayer, and assisting single mothers. Some of the people she led to the Lord have gone on to be Pastors, Evangelist and Teachers, touching the lives of thousands! This is the awesome legacy she left behind!! Sandi accepted the call to Ministry, becoming part of the Clergy in 2011. She graduated from Living Word Bible Training Center in 2013. Together with her husband, Harold, they founded The Master’s House Christian Church in Santa Rosa, CA in 2017. Sandi spent her retirement years in Santa Rosa, CA which was her dream place to live. She really enjoyed living in California, gaining new friends, and serving in the church. Sandi relocated to Virginia after the passing of her husband in 2019, to be surrounded by the love and care of her daughters. Sandi is proceeded in death by her husband Harold Grace Sr.; Her parents and stepfather: Mary Haney, Edward Barnette Woods, Sr, and Guyroan Jenkins. Her siblings: Tony, Glenda, Janie, Florence, Edward Barnett, Jr. and Virginia. Sandi is survived by her children: Veronica Charlene (Robert) Shelton; Sarah Deniene Jones and Kahlilah Baltimore; Her stepdaughters, Juanita (Donald) Livingston and Deborah Williams; Her stepson Harold Grace, Jr; Her grandchildren, Cheyenne Baltimore, Marlin Shelton, Shawn Grace, Cameron (Alaina) Atwood, Jerrika Ellinger-Grace, Alyssa Ryan, Tavia Blocker, Jaylon Grace, and Zolan Jackson; Her siblings Aaron (Rose) Jenkins, Kevin (Karen) Woods, Phillip (Darlene) Woods, Wesley Woods, Catrina Woods-Knight, Mary (Robert) Latten, Iona (Eddie) Jackson, and Roger Jenkins; Her adopted siblings Freddie Jenkins and Felicia Jenkins. As well as a hosts of cousins, great-grandchildren, sisters-in-laws, friends and saints, from coast to coast. Sandi’s pleasant personality and sweet spirit were contagious. We will all continue to honor her legacy! There is no doubt she was welcomed with "Well Done, my Good and Faithful Servant, Well Done!

The family of Sandra Pauline Grace created this Life Tributes page to make it easy to share your memories.

Send flowers to the Grace family.