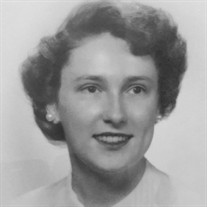 SARA (Sally) WILEY COLE DAVIDSON, 91, passed to the Lord on Friday, May 1, 2020 in Reston, VA. Mrs. Davidson was born on October 24, 1928 in Sharon, PA to the late Horace Lee Cole and Marion Cummins Cole. She was graduated from Sharon High School in 1946, Mount Holyoke College in 1950 with a Bachelor’s of Science degree in Zoology, and Case Western Reserve University in 1952 with a Master’s of Science degree. She married Lt. John Davidson , USAF, in Fairbanks, AK on October 28, 1955. They were happily married for 53 years until John passed on March 23, 2009. John’s military career took them to Alaska, Ohio, California, New Mexico, and Alexandria, VA. In 1997 John and Sally moved to Falcons Landing Military Retirement Community in Sterling VA. Sally worked for the National Institutes of Health at the National Library of Medicine for over 31 years, abstracting countless medical articles in four languages and working on the Human Genome Project. She retired from NIH in 2014 a month shy of 86. In addition to her beloved husband, Sally’s lifelong loves were music and singing. She took voice and piano lessons as a child and continued her singing career in the Mount Holyoke Glee Club. After Sally married, she sang in church and community choirs at a number of Air Force bases, in St. Luke’s Episcopal Church in Alexandria, VA for over 30 years, and in the National Cathedral Choir, Alexandria Choral Society and Bolling Air Force Base Skylarks. In 1994 Sally joined the Vienna-Falls Chapter of Sweet Adelines International which became the center of her musical life, having earned several Regional and International awards. In 2018 Sally retired from Vienna-Falls, receiving Emeritus membership in Sweet Adelines International. Sally is survived by her four children, Jennifer Newman of Ames, Iowa, John Davidson of Franklin, Tennessee, Bruce Davidson of Vancouver, Canada, and Julia Hood of Port Orange, Florida. She is also survived by 11 grandchildren and 2 great grandchildren and a host of relatives and friends. In honor of Sara’s life, a virtual Memorial Service will be held on June 27, 2020. For more information on the events, please contact Jack at (724) 418-4228 or by email at [email protected] She will, in time, join her husband, John, at Arlington National Cemetery. Memorial donations may take the form of contributions to CDP COVID-19 Response Fund, at the following link: https://disasterphilanthropy.org/donate-to-the-cdp-covid-19-response-fund/ Robin Fender Center for Disaster Philanthropy (CDP) One Thomas Circle, NW, Suite 700 Washington, DC 20005 tel: 202-464-2018

SARA (Sally) WILEY COLE DAVIDSON, 91, passed to the Lord on Friday, May 1, 2020 in Reston, VA. Mrs. Davidson was born on October 24, 1928 in Sharon, PA to the late Horace Lee Cole and Marion Cummins Cole. She was graduated from Sharon High School... View Obituary & Service Information

The family of Sara Cole Davidson created this Life Tributes page to make it easy to share your memories.

Send flowers to the Davidson family.