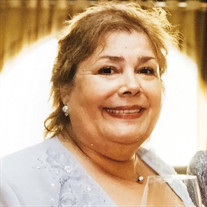 Scarlett Beard Lucas, 74, of Ashburn, Virginia, passed away on October 8, 2021. Scarlett was born in Lynchburg, Virginia, to Herbert Glenn Beard and Olive Abbott Beard on October 19, 1946. Following graduation from E.C. Glass High School, she attended Radford College (now known as Radford University). While at Radford, she met the love of her life, Robert (“Bob”) Cormell Lucas, a student at Virginia Polytechnic Institute. Scarlett and Bob married on December 29, 1967. After spending time in Germany while Bob served in the U.S. Army, Scarlett and Bob moved to Northern Virginia and eventually settled in Sterling, Virginia to raise their family. In addition to serving as the primary caregiver to her children and supporting Bob in his various professional and civic endeavors, Scarlett gave much of her time to organizations in Sterling and Loudoun County, including the Sterling Jaycees, youth sports organizations and cub scouts. And many surely remember her as dressing up for school events, even portraying the SNL character Rosanna Rosanna Danna (some say just as good as Gilda Radner). Scarlett was a member of Beta Sigma Phi, a community-based sorority. As a member of Beta Sigma Phi, Scarlett built many lifelong friendships and participated in numerous social and volunteering activities. Scarlett was also an avid bridge player starting in her college years and was a member of many bridge clubs in Loudoun County and beyond. She loved the fellowship, conversations and joke-telling that came with it, even if she did not get the best cards that day. A member of Sterling Park Baptist Church for many years, Scarlett was a youth Sunday School teacher and also was a teacher in the Mothers’ Day Out preschool program. In that capacity, Scarlett touched many lives and kept in contact with many of her former students. After raising her two sons, Scarlett began working for the British American Business Association (BABA), a business forum for British and American companies. At BABA, she worked on membership initiatives and on the planning and execution of a variety of networking and other events for members. Scarlett retired from BABA in 2014, allowing her to spend more time with her grandchildren, who were the light of her life. Scarlett loved life and she loved people. She was a friend to many and would do anything for anyone, even a stranger. Even when dealing with the health issues she faced at the end of her life, her focus and concern was on the well-being of others. She will be lovingly remembered and greatly missed by her family and many friends. Scarlett is survived by her husband, Bob, her sons Brent (Karin) and Brad (Michelle), her brother George Glenn Beard, and her grandchildren Bryce, Brock, Lauren and Aubrey. In lieu of flowers, please consider a donation to Samaritan’s Purse, the Fisher House Foundation or your favorite charity.

The family of Scarlett Beard Lucas created this Life Tributes page to make it easy to share your memories.

Scarlett Beard Lucas, 74, of Ashburn, Virginia, passed away on...

Send flowers to the Lucas family.