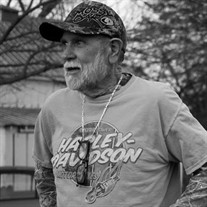 Scott C. Wilson, 67, of Leesburg, Virginia passed away peacefully with his wife and son by his side Monday, June 11, 2018, at Heritage Hall in Leesburg, Virginia. Born Thursday, April 12, 1951, he was the son of the late George E. Wilson. He is survived by his mother Jacqueline (Cole) Wilson, his wife of 40 years Jean T. (Clines) Wilson, and his son, Michael Briar Wilson. He is regarded by those around him as many things; a storyteller and a working man, one who walks among legends and who he himself has now become one. “Scott walks through time.” (Alex Horton) He was an individual who could turn heads in any room into which he strolled. A conversation with Scott was enveloping; it drew one in and caused one to open up to a man who you might have just met at that very moment. It was not a simple affair; it was one that required time, and if one wasn’t careful they could easily find themself late to prior arrangements. He was the realest man one could have ever met. There were no false claims (aside from some modest embellishment), no questioning of character, he spoke in a matter of fact way that would cause anyone to soon realize that this was a person cut from a different stone, a unique stone. His stories provided a glimpse of his saga, and were adored by those who were lucky enough to have heard them from Scott himself. He lived a life that was one of a kind, and everyone he touched walked away with his memory burning within them. This is the conclusion of his saga, but the memories he created -- the conversations over smoldering campfires, the comedic rants, the air of brilliant, wholesome, love and caring that floated around his persona -- will never be forgotten. A visitation will be held on Friday, June 15, 2018, from 6:00 to 8:00 PM at the Loudoun Funeral Chapel (158 Catoctin Circle SE, Leesburg, VA 20176) to bid farewell to Scott. Private interment will be held by the family only. In lieu of flower the family requests donations be made to Heritage Hall 122 Morven Park Rd NW, Leesburg, VA 20176 or to Capital Caring 24419 Millstream Dr, Aldie, VA 20105.

Scott C. Wilson, 67, of Leesburg, Virginia passed away peacefully with his wife and son by his side Monday, June 11, 2018, at Heritage Hall in Leesburg, Virginia. Born Thursday, April 12, 1951, he was the son of the late George E. Wilson. He... View Obituary & Service Information

The family of Scott C. Wilson created this Life Tributes page to make it easy to share your memories.