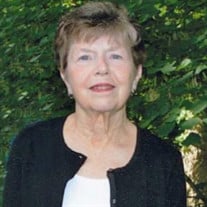 Sharon Marie Nelson, 81 formerly from Charles Town, West Virginia and Burke, Virginia passed away on Sunday, December 13, 2020, in Leesburg, Virginia. Born in Sacramento, California, Sunday, June 11, 1939, Sharon was the daughter of the late Elwood Hamlin and the late Lillian Riter Hamlin. She was the wife of the late Richard Nelson. Sharon received her nursing degree in 1960 and was a dedicated RN providing direct patient care for many years. Later in her career she turned her talents to hospital administration. She was a long tenured and valued member of the now INOVA and MedStar healthcare corporations, but her role at The Hospital for Sick Children in Washington, DC was by far the closest to her heart. Sharon, in many aspects of her life, was a trailblazer. In a time where few women were in positions of influence, she led the charge of several health policies and practices that endure to this day. Sharon was also a devoted sister, wife, mother, grandmother and aunt. Her family was her universe. Sharon is survived by her son, David and wife Sheri Nelson and her beloved granddaughter, Brooke Nelson of Leesburg, Virginia. She also leaves behind her brother, Elwood and wife Cathie Hamlin of Highland Beach, Florida, her niece Jill and husband Ward Parnell and children of Houston, Texas, her nephew Todd and wife Amanda Hamlin and children of Houston, Texas, her late nephew’s (Troy) wife Christine Hamlin and children of Overland Park, Kansas. She was preceded in death by her loving parents, her husband of 56 years Richard A Nelson, and her nephew Troy Hamlin. A graveside service will be held at Leesburg Union Cemetery, Leesburg, VA on Monday December 21, 2020 at 2:00pm. In lieu of flowers, the family kindly asks you to consider a donation in Sharon’s name through GoFundMe in support of the educational trust for her late nephew Troy Hamlin’s young children. https://www.gofundme.com/f/memorial-fund-for-troy-hamlin039s-children?utm_source=customer&utm_medium=copy_link_all&utm_campaign=p_cp+share-sheet Online condolences may be made to the family at www.loudounfuneralchapel.com

The family of Sharon Marie Nelson created this Life Tributes page to make it easy to share your memories.