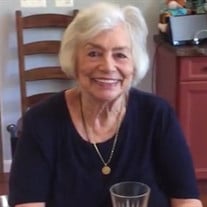 Sheila Graham Heider Longtime Loudoun resident Sheila Graham Heider, 81, died May 23rd at Inova Loudoun Hospital at Lansdowne. Born in Tacoma, Washington, to Elynore Ulrika and Ivan Charles Mikalaski, Sheila Heider later moved to the Washington, D.C. area where she met nurseryman and farmer Albert Henry Heider. Sheila married Albert Heider at St. Paul’s Rock Creek Church on December 29,1962. Their lifelong love affair lasted 52 years until Albert’s death in 2015. The Heiders settled in Lovettsville at Legacy Farm in 1970 where they raised their five daughters, including two sets of twins. In 1978, the Heiders moved to Lombardy Farm in Leesburg where Albert and Sheila established and operated Heider’s Nursery for over 25 years. In the early 1990’s, they moved their family and business to Lucketts where they owned and operated Heider’s Country Store & Farm Market until 2018. The Heiders were renowned for opening their homes to countless numbers of relatives and friends, some of whom became extended family members. Sheila and Albert’s kindness and generosity extended far beyond their Meadow Fox Farm in Lucketts, a frequent site of large gatherings for holidays and other special occasions. A fierce and loyal friend, Mrs. Heider offered sage advice accompanied by a twist of humor. Fortunate are those that can lay claim to being a friend of the Heider family. A woman ahead of her time, Sheila Heider was not only a true entrepreneur and working mother but also devoted to her community. She was an activist for various causes pertaining to agriculture and protecting the history of Loudoun County, and served as Chairman of August Court Days and warden of Christ Episcopal Church. Known for her keen mind, sharp wit and ceaseless devotion to her family and friends, Mrs. Heider was acclaimed as a lifelong horsewoman. She showed horses as a child and throughout her long life. Over the years, she expertly taught horseriding to children and adults, was an avid foxhunter, and bred Thoroughbred show horses and Welsh ponies. Sheila loved spending time as a horse and mule judge at competitions in Virginia and Maryland. She is survived by three sisters: JoAnne Newsome of Ellicott City, Janis Caracofe of Ellicott City, Judith Wingo of Clarksville; five daughters and their husbands: Holly & Evan Chapple of Lucketts, Catherine & Wade Blaha of Tilden, TX, Kristin & Bryan DiCaro of Pleasanton, TX, Heather & Scott Van Pelt of Lucketts and Lisa & Tim Eifler of Louisville, KY and sixteen grandchildren. Continuing the tradition of an “Open Door”, a celebration of her life will be held on Monday, June 3rd at 11 a.m., in the garden at Van Vixen Farm at Meadow Fox 13490 Wilt Store Road, Leesburg, Virginia 20176. (Please check back for change in location information due to weather.) In lieu of flowers, donations can be made to the Lucketts Volunteer Fire Department, who assisted the Heider family on many occasions. We encourage you to send a memory or condolences to the family at the Loudoun Funeral Chapel via link Sheila Graham Heider. A private internment will be held for family at St. Paul’s Rock Creek Church in Washington, DC.

The family of Sheila Graham Heider created this Life Tributes page to make it easy to share your memories.