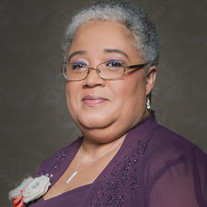 Stephanie Adele Roberts was born August 22, 1956 in Baltimore, MD to the late Horace H. Ashby, Jr. and the late Elsie Mobley. She unexpectedly transitioned from this life on May 25, 2018 in Chantilly, VA where she recently relocated and was very happy with her new environment. Her childhood and adult years were spent in the Greater Baltimore area. In 1982, Stephanie was blessed with her only child, Jason whom she devoted herself. As a single mother Stephanie found a way to make sure Jason was well taken care of, and wanted for nothing. Any aspect she may have been unable to fill she made sure the other immediate family members were able to supplement. As a result of the family dynamic, the two shared a unique relationship that at times was perceived to be comical. Stephanie attended and graduated from Walbrook Senior High School in 1973, located in Baltimore City, MD. She went on to attend UMBC and Morgan State University. Throughout her professional career, she worked at various places and companies; such as the Social Security Administration; the family restaurant and lounge, The Red Rooster; the Southland Corporation; CCBC; and Verizon Connection Solutions. She ultimately retired from Verizon Connection Solutions in 2008 after a long tenure of service as an IT help desk specialist. Stephanie really enjoyed working at Verizon, especially the tight connection she had with her fellow help desk techs. In more recent years, she decided to go back to work and briefly worked for Chartwells HE at Towson University before her health declined. While at Towson, she enjoyed the interaction with the students and her fellow co-workers at the Glen Marketplace. One of her biggest joys was being with her family, especially during gatherings for holidays, birthdays, and various events. She adored her two grandchildren, Sydney and Jeremiah, as she enjoyed watching them develop and grow. Nearly every other day she would call to see how their day went in school; did Sydney have a “good day”; and see if Jeremiah knew the day of the week. In addition, she was a loving mother, sister, and aunt. Stephanie leaves to cherish her memory: son, Jason Roberts; daughter-in-law, Sheena Roberts; brother, Anthony P. Ashby, Sr.; sister-in-law, Linda (Mona) Ashby; stepmother, Francine Ashby; stepbrother, Eric Ailor (Seena); nephews, Anthony Phillip Ashby, Jr. (Shamaere), Andrew Ashby, and Taylor Wise; grandchildren, Sydney Roberts and Jeremiah Roberts; sister-in-law, Anita Watson (Les); and a host of other family and friends. Services are private and at the convenience of the family.

Stephanie Adele Roberts was born August 22, 1956 in Baltimore, MD to the late Horace H. Ashby, Jr. and the late Elsie Mobley. She unexpectedly transitioned from this life on May 25, 2018 in Chantilly, VA where she recently relocated and was... View Obituary & Service Information

The family of Stephanie Adele Roberts created this Life Tributes page to make it easy to share your memories.

Send flowers to the Roberts family.