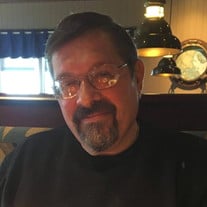 Stephen J. Lamb, age 70, of Sterling, VA passed away on Monday, June 15, 2020 from natural causes. Steve was born in Utica, NY and grew up in nearby Hubbardsville on the family farm before moving to Washington, D.C. in 1960. He graduated from Woodrow Wilson High School. As a youth Steve was a member of the Order of DeMolay, a fraternal organization for young men ages 12-21 sponsored by the Freemasons. In his twenties, Steve joined the Freemasons and was a devoted volunteer for the Robert Le Bruce chapter of the Order of DeMolay. Steve was very proud of his U.S. Army military service during the Vietnam era. Upon completion of his service in California, Steve earned a B.S. degree in Accounting from Benjamin Franklin University in Washington D.C. and became a Certified Public Accountant. Over his long career, Steve served as Controller for several businesses in the northern Virginia area, where he was relied on for his in-depth knowledge of accounting, business systems, and taxation. During the 40 years Steve lived in Sterling, VA, he was involved in his community and his homeowner association, where he was president. In retirement Steve enjoyed reading, baseball, and travel to his grandchildren’s athletic events and miniature golf outings with his brothers. Steve is survived by his son, Technical Sgt. Matthew Lamb, US Air Force, and daughter-in-law Technical Sgt. Jamie Lamb, US Air Force, four grandchildren, Adrienne, Rory, Dean, and Abigail Lamb and his beloved brothers Dorrance W. Lamb of Rochester, NY and Bruce W. Lamb of Rockville, MD. He will be missed by all who knew him and relied on his knowledge and generosity towards others. During the COVID environment, arrangements will be private. Steve will be laid to rest at Arlington National Cemetery and there will be a memorial service to celebrate Steve’s life at a later date.

Stephen J. Lamb, age 70, of Sterling, VA passed away on Monday, June 15, 2020 from natural causes. Steve was born in Utica, NY and grew up in nearby Hubbardsville on the family farm before moving to Washington, D.C. in 1960. He graduated... View Obituary & Service Information

The family of Stephen J. Lamb created this Life Tributes page to make it easy to share your memories.

Send flowers to the Lamb family.