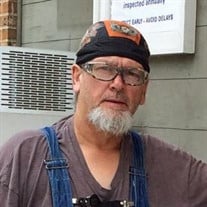 Terry Talbot Jenkins, 67 of Lucketts, VA died Sunday, May 26, 2019 from injuries sustained from a motorcycle accident, as he and his wife, Sarah Harlow-Jenkins returned from the Rolling Thunder event in Washington, D.C. His bride of two months suffered fatal injuries as well. He was born on October 21, 1951, the son of the late Richard Vincent Jenkins and Thelma “Betsy” Jenkins. He grew up in Stumptown, VA surrounded by a large extended family. He graduated from Loudoun County High School in 1972 and worked at Glaydin School in Lucketts for 9 years. He began driving professionally for Cooper’s Welding and Repair in 1981 and continued there until the present. As a young man, Terry was an amateur mechanical engineer as he took creative license designing vehicles from available parts. Mufflers were often considered unnecessary accessories. He spent his free time working on and riding dirt bikes, restoring old trucks and hot rod muscle cars. From bicycles to his beloved Harley bikes, Terry loved to ride. He could often be found wearing his trademark bib overalls and Harley do-rag strolling the aisles of Wal-Mart or making new friends at yard sales as he acquired some new “antique” miniature. Terry was an avid conversationalist, engaging people wherever he went. It was rare that he could go somewhere without meeting someone he knew. He enjoyed clearing the roads of snow and talking with those who came out to thank him for his service. He never met a stranger and always had a positive spin on whatever life tossed him. He liked to cook and recreate the recipes of his mother. Terry was known for his surprise visits. He would often stop to see family, friends, shut-ins, those in nursing homes, as well as, those he had not heard from in awhile. He loved children and they knew it. Terry was a one of a kind guy and was not interested in conforming to cultural norms or expectations. He will be lovingly remembered by a son, Sheldon Jenkins (Sarah and their son, Eli) of Winchester, VA, a brother, Stephen Jenkins (Marcia Coss) of Berryville, VA, two sisters, Dale Jenkins of Ashburn, VA, and Donna Diehl (Jeff Diehl) of Lockbridge, WV, a niece, Valerie Wymer (Gy Wymer) of Clearbrook, VA, four nephews, Paul Jenkins (Carrie Jenkins) of Charlestown, WV, Keith Jenkins of Sterling, VA, Erik Diehl of NYC, NY, Andrew Diehl of Chicago, IL, two aunts, an uncle, many cousins, in-laws, Joyce Harlow, David and Susan Harlow, stepsons, Jacob and Kaleb of Lucketts, VA and a great host of long time friends that became his family. To help defray funeral expenses, the family has asked that in lieu of flowers, memorial donations be sent to Sheldon Jenkins 174 Solara Drive, Winchester, VA 22602. Interment will be Friday, June 7 at 2 p.m. at Union Cemetery, Leesburg, VA. The celebration of Terry’s life will be on Saturday June 8 at 3 p.m. at the Lucketts Community Center, Lucketts, VA.

Terry Talbot Jenkins, 67 of Lucketts, VA died Sunday, May 26, 2019 from injuries sustained from a motorcycle accident, as he and his wife, Sarah Harlow-Jenkins returned from the Rolling Thunder event in Washington, D.C. His bride of two months... View Obituary & Service Information

The family of Terry Talbot Jenkins created this Life Tributes page to make it easy to share your memories.