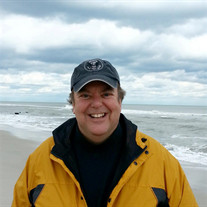 Thomas Patrick Goggin, Jr., age 63, of Paeonian Springs, Virginia passed on Thursday, June 13, 2019, at his home. Tom is survived by his beloved Ginger Chiantella, sons Peter Goggin and his wife, Lindsey, and Kyle Goggin and his wife, Sara, step-children Will Jones, Catherine Herse and her husband, Robert, his siblings, Mary McManus and her husband, Tim, Sheila Van Vleet and her husband, David, Dotty Goggin, and Michael Goggin and his wife, Deirdre Shupe, as well as his seven grandchildren. Tom was born on August 30, 1955 to the late Thomas Goggin, Sr. and the late Dorothea Sullivan Goggin in Boston, Massachusetts. As the son of a Marine Corps officer, he lived in a variety of places around the country before settling in Virginia. He attended Oakton High School and graduated from George Mason University in 1977. Tom’s career began with a job in the Central Intelligence Agency, and was defined by service in a variety of roles and positions in support of other government agencies including the Marine Corps, Army, and, most recently, the Department of Homeland Security. While he loved serving his country in these jobs, he also took great joy in his position as a substitute teacher in the Fairfax County Public School system, and a high school football coach for a number of years. Tom’s greatest joy was his family. He never seemed more happy than when surrounded by his kids, siblings, nieces and nephews, and especially his grandchildren at one of the frequent family gatherings. He showered love on those close to him and took especially great delight in spoiling all the kids in his family with attention, gifts, and too much dessert. Constantly upbeat, you couldn’t help but feel encouraged when around him. We will all greatly miss his smile, his laugh, his stories, and his presence. A funeral service will be at 11:00 AM on Thursday, June 20, 2019 at Loudoun Funeral Chapel located at 158 Catoctin Circle, SE Leesburg, Virginia 20175 with the Reverend Bill Fullilove officiating. The family will receive friends from 6:00 PM to 8:00 PM on Wednesday, June 19, 2019, at Loudoun Funeral Chapel, 158 Catoctin Circle, SE, Leesburg, Virginia. In lieu of flowers donations can be made to The Nature Conservancy Cape Cod Shoreline Preservation Fund at the following link: https://support.nature.org/site/Donation2?df_id=15000&15000.donation=form1 Please enter under Person to be Remembered: Thomas Goggin, Paeonian Springs,VA Online condolences may be made to the family at www.loudounfuneralchapel.com

The family of Thomas Patrick Goggin Jr. created this Life Tributes page to make it easy to share your memories.