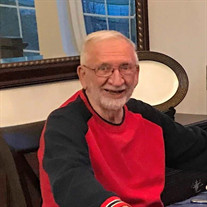 Thomas Cameron Jebo Sr., 81, lately of Leesburg, Virginia, passed away Saturday, Feb. 1, 2020. Mr. Jebo was born July 19, 1938, in Potsdam, N.Y., to the late Howard James Jebo and Cecily Cameron Jebo. The oldest of three brothers, Mr. Jebo spent his entire childhood in Potsdam and attended college there, graduating from Clarkson University with a degree in chemical engineering in 1960. He met his future wife, Nancy Lee Austin, in a church Sunday school class when he was five and she was four. They married in 1959, spending the next 51 years happily together before Mrs. Jebo passed away in 2011. He loved her very dearly and never stopped missing her. Mr. Jebo had a successful career as an engineer and executive, working briefly at Merck before taking a position at IBM. He stayed in that job for nearly two decades, including three years in Japan. In his forties he came to faith in Jesus Christ and left industry when he felt God’s call to ministry. For the next 25 years he and Nancy counseled and cared for missionaries in churches & on mission fields around the world. There was hardly a corner of the globe that they didn’t visit. In recent years, Mr. Jebo loved reading, completing puzzles and taking scenic drives. He most especially loved spending time with his grandchildren, who called him “Papa,” faithfully attending their games, concerts and plays. Mr. Jebo is survived by his youngest brother Peter Jebo, and wife Linda, of Los Angeles, Calif.; his son, Thomas C. Jebo Jr, of Seattle, Wash.; his daughters, Elise Sutherland, and husband Daniel, of Brambleton, Va, and Christina Everhart, and husband Jon, of Rochester Hills, Mich; and his nine grandchildren and one great-grandchild.

The family of Thomas Cameron Jebo Sr. created this Life Tributes page to make it easy to share your memories.

Send flowers to the Jebo family.