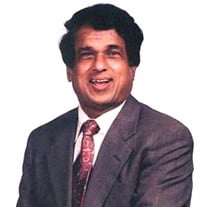 Vaithilingam Thuraisamy (Bala) was born on February 8th, 1932 and passed away peacefully on March 17th, 2022, just a month after he reached his 90th birthday. His family surrounded him with love and prayers. He was born in Kuppilan, a village in Jaffna, Sri Lanka (Ceylon). The house of his birth is now the Sivagnana Ashram. His own father, Vaithilingam Vallipuram, went to Malaysia at the age of 16 to work on the Malaysian Rail system in the early 20th century which allowed him to retire in his 40s in Kuppilan with his wife and beloved mother to Bala, Sivagangai Vaithilingam, along with their four children. His own life took him far and wide from his early school days in Jaffna, Sri Lanka to the one and only University in Colombo, Sri Lanka where he received his B.Sc. in Mathematics. He stayed on to be a lecturer in Mathematics and Physics and was a hostel supervisor. He then decided to pursue a career in England as a chartered accountant. In 1958, traveling to England was a three week journey by boat, starting from Colombo, Sri Lanka through Bombay in India, Aden in Saudi Arabia, The Suez Canal in Egypt, Beirut in Lebanon, Marseilles in France, and landing in Southampton, England. However, he soon discovered this was not quite the career for him and found a job in Yemen as a math teacher. He came to Sri Lanka in 1960 and married Yogaranee Pararajasingham from Ureelu in Jaffna and returned to Yemen. It was during this time that his friend Willy Arunasalam encouraged him to come to the United states and attend the University of Massachusetts to pursue a Masters degree in Mathematics, which then led him to a PhD in Mathematics at the University of Maryland. After earning his PhD, he started working for AT&T Bell Communications in 1967 and was then asked to work for NASA as part of the International Space Program. He was truly a “Rocket Scientist”! He was awarded the NASA Apollo Achievement Award by the USA NASA Space Center on July 20th, 1969, the same day the United States put a man on the moon. In addition to his career accomplishments, he and his wives were instrumental in bringing many family members and friends to the United States and supporting them until they were able to stand on their own feet. The unexpected death of his wife on December 8, 1989, changed the course of his life and led him to retirement. However, he resumed his life happily in marriage with Rukmani Sabapathipillai who joined his life as his loving companion. He was active and engaged during his entire life: trading in the stock market, tutoring students and family members in Mathematics, continuing his ballroom dancing, and running in races. Into his early eighties, he was still an athlete, participating in the 100 and 200 yard dash, the long jump, and shot put in the Senior Olympics! He was good enough to win medals for these events! He was a lifelong reader, continually learning and growing, which kept his curiosity alive and his spirit young. The world is blessed to have known such a kind, accomplished, generous, and wonderful soul. He is loved by many and will be missed by many. He is survived by his wife Rukmani, Son Prakash and his wife Bharathi, Daughter Kalpna, Son Kuplan Ganesh and his wife Anita Sharma, Granddaughter Asha, Grandsons Taige and Shiv, Sister Malar Sivasambunathan and so many beloved nieces nephews and cousins and friends and former colleagues. Funeral Services will be held on Monday March 21, 2022 at 1pm. If you would like to give a donation in lieu of flowers to the Sivapoomi School and Orphanage in Jaffna Sri Lanka; it is set up as a trust: You may donate in three ways: 1. Please use the Zelle ( for U.S. Bank accounts) money transfer feature from your bank to send your donation to this email address: [email protected] when you add this email as the recipient it will state that the account belongs to a name starting with Siddhartha which is correct. The funds will then be transferred to the school's trust. 2. If you prefer Pay Pal use this link: https://www.paypal.com/donate/?business=4Z7N6AQUVHQ2Q&no_recurring=1¤cy_code=USD when you go to this link it will state donate to Karthika Siva which is correct. The funds will then be transferred to the school's trust. 2. If you would like to send a donation directly: Sivapoomi School Commercial Bank – JAFFNA Account Name -SIVAPOOMI TRUST Current Account NO. - 1060016510 SWIFT CODE – CCEYLKLX Address: Kondavil East, Kondavil, Jaffna, tel +94 021-222-7938, website: Sivapoomi Trust – Kondavil Sivapoomi Trust – Kondavil We will accept donations through the 31st day which is April 16, 2022. Thank you for all your kindness.

Vaithilingam Thuraisamy (Bala) was born on February 8th, 1932 and passed away peacefully on March 17th, 2022, just a month after he reached his 90th birthday. His family surrounded him with love and prayers. He was born in Kuppilan, a village... View Obituary & Service Information

The family of Vaithilingam "Bala" Thuraisamy created this Life Tributes page to make it easy to share your memories.