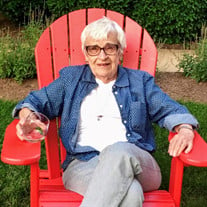 Virginia M. Hutchinson, age 91, of Ashburn, VA, passed away suddenly on Monday March 15, 2021, at Tribute at One Loudoun, an Assisted Living community in Ashburn. Although she had only lived at Tribute for a little over a year, she was known by the staff for her love of books and witty personality. Born Friday, December 27, 1929 in Trenton, New Jersey, she was the daughter of the late Frank and Louise (Chamberlain) Pieslak. Virginia grew up in Trenton, spending a lot of time with the many Aunts, Uncles and cousins from her Mother’s large family. She graduated from Trenton High School where she met her future husband Donald (“Hutch”) Hutchinson before he joined the Navy. Virginia and Hutch raised their three daughters in homes in Pennsylvania and Ohio, eventually settling in Bethel Park, PA, a suburb of Pittsburgh. Virginia enjoyed bowling and golfing. She was an avid reader and an accomplished seamstress who also enjoyed knitting and crocheting. Over the years she created many dresses, suits, Christmas outfits and several years of Easter coats for her girls. Virginia was fond of cooking and entertaining, hosting many large Christmas parties for friends and associates of her husband’s accounting firm, D.C. Hutchinson and Co. Once Hutch retired, they moved to Sun City, in Bluffton, SC, where they enjoyed golf, going to Hilton Head Island, and traveling on several cruise trips to Europe and the Caribbean. They were blessed with the company of great friends in Sun City for over 15 years. Virginia is survived by her daughters: Linda (husband Tom) Wolever of Bluffton, SC and Donna (husband Frank Homer) Hutchinson of Crossville, TN and Jane (husband Brad) Norris of Centreville, VA, grandchildren: Andrea, Alysa, Adam, Anne and Annalise, and great grandchildren: Chase, Brooks, Reeves, Grady and Penny. She was preceded in death by her husband Donald C. Hutchinson and a younger brother Frank Pieslak of Fredericksburg, TX. Service will be private and at the convenience of the family.

Virginia M. Hutchinson, age 91, of Ashburn, VA, passed away suddenly on Monday March 15, 2021, at Tribute at One Loudoun, an Assisted Living community in Ashburn. Although she had only lived at Tribute for a little over a year, she was known... View Obituary & Service Information

The family of Virginia M. Hutchinson created this Life Tributes page to make it easy to share your memories.

Send flowers to the Hutchinson family.