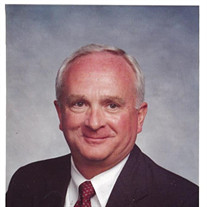 Warren Thomas Braham of Ashburn, VA passed away on Monday, November 22, at INOVA Loudoun Hospital after a short illness. Warren, was a long time resident of Loudoun County where his leadership, sharp wit, wisdom, and belly laughter inspired those who knew him to be their very best. Warren was born in Milwaukee, Wisconsin on February 19, 1932 to Francis George and Ruth Braham. He was raised in Merrick, Long Island New York. He graduated from Washington and Lee University in Lexington, Virginia and earned his Juris Doctorate from The University of Virginia, Charlottesville, Virginia. Warren’s career focused on building Trust Departments at several banks in Virginia starting in the late 1950s. He met his bride Anne at one of those small banks in Lynchburg, Virginia where together they started their family with the births of Mike and Sue. His only job outside of Virginia, in the early 1960s, was to St. Paul, Minnesota where their daughter Karen made the family complete. Warren completed his career in Leesburg, Virginia as the local President of First American Bank. Warren is survived by his loving wife Anne, of 62 years, his son Mike Braham (Lisa), daughter Sue Braham McDonough (Brian), daughter Karen Braham Savopoulos, (Mark). His grandchildren; Shawn, Josh and Shannan McDonough, Alexandra O’Connor, Austin Braham, Dylan, Kylie, Ryan and Kendall Savopoulos and three great grandchildren, Wells and Adaire O’Connor and Sadie Grace McDonough. Warren will be best remembered for his wry smile, extreme love for his family, church and country. In lieu of flowers, contributions may be made to St Jude’s or Capital Caring Hospice.

The family of Warren Thomas Braham created this Life Tributes page to make it easy to share your memories.

Send flowers to the Braham family.