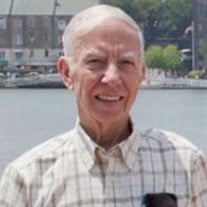 On Thursday, November 14th, William (Bill) Gray, loving husband, father, grandfather and great-grandfather passed away at the age of 85. Bill was pre-deceased by his parents, William and Lois Gray and siblings Richard Ray Gray and Robert L Gray. Bill is survived by his wife of 59 years, Wanda; 2 children: Laura (Ken) Walters and William (Joann) Gray; 2 step-sons: Roy Wirick and Kenny Wirick; 2 grandchildren: Jennifer (Seth) Haines and Samantha Wheeler, 2 great-grandchildren: Liam and Alannah Haines. Bill was born on January 27, 1934 in Silver Spring, MD to William and Lois (Thompson) Gray. He and his 5 younger siblings grew up on Gray’s Lane in Kemp Mill. Bill served in the Army as a paratrooper for three years. When he returned to Maryland he met his future wife, Wanda Clark in Kensington. They were married for 59 ½ years. As they started a family, Bill went began a job as a technician at the Johns Hopkins Applied Laboratory. While working and providing for a family, Bill went back to college. After many night school classes he earned a bachelor’s degree in Electrical Engineering at the University of Maryland and a masters degree in Electrical Engineering at Johns Hopkins University. Bill loved his family very much and enjoyed spending time with them whenever possible, taking his grandmother and aunts on Sunday drives to Sugar Loaf Mountain, popping over to his parent’s home to fix this or that and planning month long camping trips every summer during Laura and Billy’s school age years. On one trip to Niagara Falls back in the late 1960s, they traveled to view both sides of the falls. At that time crossing the border was a fairly simple task, unless you were carrying a firearm, which he was. He had to surrender the firearm to Canadian Customs until we passed back thru to the US. The Canadian side of the falls were a beautiful sight for the entire 15 minutes that were spent in Niagara Falls, Canada – had to rush back to claim his firearm which he had borrowed from one of his brothers! Bill enjoyed working at the Johns Hopkins Applied Laboratory so much that he stayed for 36 years, finally retiring in 1998. Bill was part of several big projects, one in particular was MSX mission ( https://spacenews.com/editorial-two-missions-made-difference/ ) His job often required travelling and on several occasions Wanda traveled with him to watch rocket launches from Cape Canaveral. He traveled to Wallops Island VA, Lompoc, CA, Cape Canaveral, FL, Fairbanks, AK, Nairobi, Kenya for work. He and Wanda continued to travel together after the kids had grown up and explored new destinations like Disney World and Hawaii, never forgetting souvenirs and postcards for their children and grandchildren. They went camping to their favorite spot – Shad Landing. Wanda and Bill went to many music festivals to listen to their favorite bluegrass artists. They also took dancing lessons and were “regulars” at Blob’s Park, a polka palace. Growing up on a farm, Bill acquired exceptional farming skills. He enjoyed tending to a small garden in his backyard usually filled with tomato, squash and pepper plants and preferred homegrown vegetables over store bought. Bill loved to do yardwork. He and Wanda would spend most weekends making their little patch of Wheaton a lush and green oasis for them to enjoy with their friends and family. Bill was also an accomplished ‘do it yourself’ person before it was the popular thing to do. Doing it himself saved money! He made many improvements to their home. He remodeled the kitchen, put in new windows, replaced the roof on multiple occasions, painted and added additional rooms and a bathroom in the basement with his brothers’ help. Ray did the plumbing and Bob did the tile work. In the family lore, there is a story about how all the Gray brothers came over to help Bill replace his roof for the first time. Bill was still reading a book about the proper way to replace a roof as his brothers sat up on the roof waiting to get started. Research should have been Bill’s middle name! Bill also loved to tinker in his shop in the basement and his engineer mind was never at rest. It was apparent he was a talented repair man as there were never any repairmen at the house. If Bill couldn’t fix it, then it really was broken and it went to the dump. Rarely would there be any spare parts remaining when he was finished with his many projects. If you couldn’t find Bill in the back yard, or the basement or at his parent’s home, he was likely in his office “counting his money” as his wife would put it. Bill was an avid penny-pincher and followed financial news. He made many wise investments as a result of his copious amounts of research. Bonds or stocks? 401ks or IRA or Roth IRA? As many folks can attest, Bill was a very “thrifty” person and always looked for more ways to save. Half-price pizza night? He was there. Don’t bother asking to go on another night! Ice cream sundaes with the kids and grandchildren? Absolutely, at McDonalds for the $0.50 sundaes. Camping instead of hotels? Absolutely, much cheaper! Bill saved so that he and Wanda could have a comfortable retirement. Bill was present for every important occasion and family event and had a hearty laugh with a warm and dazzling smile. Very much a creature of habit, he valued quiet time in the mornings having a cup of coffee and reading the daily newspaper clipping pertinent articles to pass along to family members. Bill will be remembered for his calm demeanor, work ethic, meticulousness, patience, and sensibility, as well as his affinity for Neapolitan ice cream and fruitcake. The family wishes to thank you for your well wishes and support. Thank you for being part of Bill’s life, he loved you all very much. In lieu of flowers, please donate to a charitable organization of your choosing.

The family of William T. Gray created this Life Tributes page to make it easy to share your memories.

Send flowers to the Gray family.