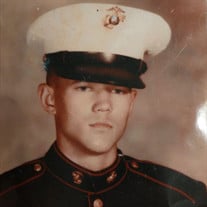 October 10, 1950 - March 8, 2022 William W. Johnston (Bill / Billy) was born on October 10, 1950. He was raised in Virginia and lived his entire life there. Born the son of William W. and Alberta (June) Johnston in Falls Church, VA, Bill attended Marshall High School and enlisted in the service as a proud Marine. He honorably served in the Marine Corps from October 22, 1968, to November 4, 1970, stationed in Vietnam. Bill worked as a heavy equipment operator for many years, mostly with William A. Hazel, Inc., until he became a crew foreman. Eventually he became an employee of Fairfax County Water Authority, where he eventually retired. Best known as a friend to everyone, Bill had a huge sentimental heart he tried to conceal at times with a tough exterior. He was funny and could deliver a punchline seamlessly. Extremely generous in nature, he always loved company and yearned to be surrounded by friends and loved ones. He had an affinity for cars, trucks, and motorcycles and when a bit younger, looked forward to riding his custom Harley during the annual Christmas toy drive to deliver toys to children who were less fortunate. Christmas was one of his favorite times of the year. When his daughters were little, he would climb on the roof, stomp around, ringing jingle bells, reveling in the magic of their delight. Bill loved his children and grandchildren deeply, often stating they were his reason for living. There was no one like Bill Johnston. His unique charm will be forever with us. May his light shine through us and may we all be comforted by our most precious memories. He will be dearly missed. Bill was preceded in death by his parents, William W., and Alberta (June) Johnston. He is survived by his son Jason Mason (wife Jackie), daughters Jessica, Jennifer, and Lauren; his grandchildren (to whom he was known as “Pops”) Jasmine, Jade, Leland, Cole, Jaxon, Gracie, and Willow; siblings Mike, Wayne, John, Juli, and Tom. The family will receive friends at Loudoun Funeral Chapel 158 Catoctin Circle SE Leesburg, VA. on Friday, May 13th, 2022 from 2:00-3:00 pm. Bill will be honored by a military funeral TBA, in the upcoming year. In lieu of flowers the family would appreciate donations to the Veterans Administration https://www.cdceportal.va.gov/donate_at_facility/ Click the link to choose a state and facility to donate to. Donations at any facility will be appreciated. Veterans Crisis Line: We’re here Anytime, Day or Night – 24/7 Phone: 1-800-273-8255 and Press 1 Text: 838255 Email: https://www.veteranscrisisline.net/

The family of William Winfred Johnston created this Life Tributes page to make it easy to share your memories.

Send flowers to the Johnston family.