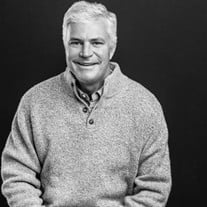 William Edward Ware, Jr., passed away on January 31, 2021 in Leesburg, Virginia. Born on April 29, 1964, in Philadelphia, PA. Bill lived in Pennsylvania, Florida, and Ohio before graduating from York Suburban High School (PA) in 1982. Bill went on to graduate from Penn State University in 1986 with a BS in Geography from the College of Earth & Mineral Sciences. His studies led the way for him to pursue a career in Cartography. His passion for maps was undeniable. Whether creating or reading maps, they were keys that opened doors of wonderment and adventure for him. After graduating from Penn State, Bill spent time living and working in Washington State, Montana and Colorado. Bill traveled extensively throughout the Western United States and around the world. His many adventures included summiting Mt. Rainier and visiting Nepal's infamous base camp at Mt. Everest. He was also an avid outdoorsman, mountain climber, telemark skier, and a graduate of the National Outdoor Leadership School (NOLS). His love of nature provided a spiritual grounding and an environmental ethic which characterized his outlook on social issues and conservation practices. Wherever Bill went, he made numerous friends. His sense of humor and his friendly smile always left an impact. He was exceptionally kind, compassionate, and loving to all who had the privilege to know him. He was loved immensely by his family and he will be dearly missed. Bill is predeceased by his father, the late William Edward Ware, Sr. and leaves behind his mother, Margaret Mary Ware, and three sisters: Carol Nau and husband Richard of Jarrettsville, MD (with children Sarah and Dan); Sharon Hewitt and husband Sam of Essex Junction, VT; and Denise Landers and husband Richard of Marshall, VA (with children Brandon and Brooke). Bill is also survived by his beloved dog and partner in every adventure, Loki. There will be no service at this time.

The family of William "Bill" Edward Ware Jr. created this Life Tributes page to make it easy to share your memories.