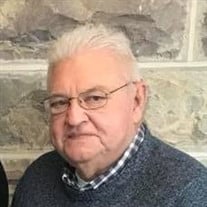 Woodrow “Woody” Wilson Williams, Jr. (73) of Ashburn, died on January 31, 2020 after a brief illness. He was born September 15, 1946, to the late Woodrow Wilson Williams and Hazel Royston Williams of Marshall, Virginia. Woody graduated from Richmond Professional Institute and later earned additional degrees from Marymount University and Averett College. He worked as a finance manager for Boeing and later SAIC. He leaves behind his beloved wife of 53 years, Linda, children Cassandra Donahue (Patrick), Steven Williams (Christine), Melissa Thorne (Gary), and Ashley Williams as well as grandchildren Jillian, Andrew, David, and Matthew. Woody loved to have fun, play jokes, plan outings, and support his family’s busy schedules. He also loved to find and patronize the small hole-in-the wall local restaurants, even if it meant adding hours to a trip to go out of the way to find it. Woody could regularly be found in the bleachers, on the sidelines, and in auditoriums watching the sporting events, music concerts, plays, and recitals of his kids and later, his grandkids. In recent years, he enjoyed attending Washington Nationals games and one of his last excursions was to see the Commissioner’s Trophy in person. He loved watching VCU basketball, even though he did not like that his alma mater changed its name from RPI to VCU after he graduated. While he was a member of the George Washington Model A club, he loved to plan drives – both short and long – taking care of tours, routes, accommodations, and entertainment, and for a few years, he helped organized the Sully Car Show. He made many wonderful life-long friends through the car club. He loved jokes, and long-running ones even more. Living a life of service was important to Woody. He was a member of Sterling Park Baptist Church where he served as a deacon, church treasurer, and Sunday School teacher. He was a Boy Scout Troop leader for boys with disabilities at the National Rehabilitation Center in Leesburg. He volunteered as team managers for travel soccer teams that his daughters played on and he was a past president of the Model A Club. A memorial service will take place Saturday, February 8 at Heritage Baptist Church in Ashburn, Virginia at 11 a.m. with visitation from 10 a.m. to 11. In lieu of flowers, the family requests donations to the American Cancer Association or the American Diabetes Association.

The family of Woodrow Wilson Williams Jr. created this Life Tributes page to make it easy to share your memories.

Send flowers to the Williams family.