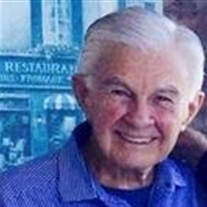 Cornelius E. Tierney CPA, GWU Professor On Sunday, February 2, 2020, Cornelius E. Tierney of Lansdowne, VA., died at the age of 85. A long-time Loudoun VA., County resident, he was a certified public accountant and a general partner and national director with Ernst & Young prior to retirement in 1992. From 1993 he was a professor of accountancy at the George Washington University until retirement from academe in 2005. Throughout his career, he specialized in federal financial management, authoring or co-authoring numerous books and professional articles on public sector accounting, auditing, and financial systems. Mr. Tierney, born on April 23, 1934 in Taunton, Massachusetts, moved to Loudoun County, VA., in 1970. From 1952 to 1956, Mr. Tierney served in the US Navy on a destroyer mine-sweeper and later in the submarine service. He was a 1958 bachelors graduate of Bryant University (Smithfield, R. I.) in accounting and finance, a 1960 MBA graduate of Suffolk University (Boston, MA) and the 1992 recipient of a DBA, honoris causa, also from Bryant university. He enjoyed many good books, many miles of jogging and many rounds of golf. His survivors include his beloved wife of more than 60 years, Louise E. Tierney and their children: daughter Karen A. Tiller of Lansdowne VA., and son Kevin M. Tierney and his wife Jan of Ormond Beach, FL. In addition he is survived by three grandchildren: Jennifer L. Hatfield and her husband Michael of Winchester, VA., Amy L. Tiller of West Palm Beach, FL and Jeffrey D. Tiller of San Francisco, CA., and two great grandchildren: Natalie Hatfield and Carter Hatfield of Winchester, VA. A private memorial service was held at the Loudoun Funeral Chapel, Leesburg, VA.

The family of Cornelius E. Tierney created this Life Tributes page to make it easy to share your memories.

Send flowers to the Tierney family.